U.S. officials in recent days expressed to the Palestinian Authority that President Obama's administration is "disgusted" with Israel, a top aide to PA President Mahmoud Abbas told WND in an interview.

Nimr Hamad said the White House was disgusted that Israel is refusing to halt all settlement activity as a precondition for re-starting talks with the PA over the creation of a Palestinian state. "Settlement activity" refers to Jewish construction in the West Bank and eastern sections of Jerusalem.

Hamad repeated that the term "disgusted" was used more than once in recent meetings with U.S. envoys to describe the administration's attitude toward Israel. Hamad did not name the U.S. envoys using the terminology. 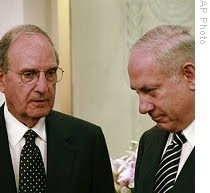 George Mitchell, Obama's envoy for the Israeli-Palestinian conflict, just this week wrapped up a series of meetings with Israeli and Palestinian leaders over re-starting talks.

The sources specified that as a confidence-building measure toward the PA, Israel will be asked by the Obama administration to hand over security control to territories designated in the 1993 Oslo Accords as Area B – referring to cities administered by the PA but largely controlled by Israeli security. The specific section of the Oslo Accords regarding control of Area B was finalized in 1995.

Separately, a top PA source, speaking on condition his name be withheld, told WND two weeks ago the Obama administration largely has adopted the positions of the PA to create a Palestinian state within two years based on the 1967 borders, meaning Israel would retreat from most of the West Bank and eastern sections of Jerusalem.

The official said Obama also accepted the PA position that Israeli-Palestinian negotiations begin where they left off under Prime Minister Ehud Olmert, who went further than previous Israeli leaders in his concessions to the Palestinians.

The official claimed the Obama administration will still support the announcement of a Palestinian state within two years.

Is the 'Obama effect' turning the world against Israel? - Ha'aretz