Peace Activists Staged a Protest of Megiddo in the Jezreel Valley

To draw attention to their protests, peace activists from Greenpeace and World March staged a demonstration at Mount Megiddo, the Israeli archaeological site in the Jezreel Valley, to warn the world that it must disarm or face the Biblical battle referred to as Armageddon. According to Greenpeace there are 23,ooo nuclear warheads in the world today and just 500 detonated at once could cause an ice age for 10 years. And therefore, they held a die-in to alert the world of the nuclear danger today.

During the die-in the activists displayed a large banner which read, Disarmament or Armageddon, a reference to the last days battle in the Jezreel Valley as foretold in Bible prophecy. 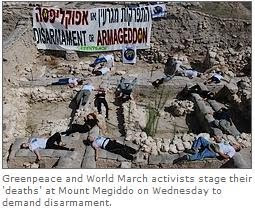 A protest by peace activists in the Jezreel Valley at Megiddo calling for a worldwide nuclear disarmament or face Armageddon is a reminder of the Biblical prophecy that focuses on this area of the world.

Any student of Bible prophecy and, in fact, almost everyone has heard about that battle of Armageddon. This end times war is to take place in the Jezreel Valley at Mount Megiddo in the center portion of the state of Israel. Recently, a group of peace activists held a protest on Mount Megiddo which is today an archaeological site and they met there to demonstrate against nuclear proliferation in our world today. The activists called for total disarmament or face Armageddon. The reality is that this world is not going to disarm and get rid of all their nuclear weapons - quite the contrary. There are now more nations that ever before working to develop nuclear weapons of mass destruction.

Bible prophecy does call for the end time battle known as Armageddon. Revelation 16:13-16 says that Satanic forces will be used to bring all the nations of the world to the Jezreel Valley in Israel. Zechariah 14:2 says that the beginning of this campaign will be when all nations join together in Jerusalem to try and stop the return of the Messiah Jesus Christ back to the Earth. As these armies will retreat to the Jezreel Valley where evil will try to overcome good, Jesus Christ will prevail and will be the victor in the battle of Armageddon (Revelation 19:11-22).

Protests by peace activists at Megiddo in the Jezreel Valley is evidence that Bible prophecy will be fulfilled.

How about a little Armageddon at Megiddo? - Jerusalem Post

What is the battle of Armageddon? - GotQuestions.org