Obama: Loved by Many, Feared by None

Tim Reid summarized the Obama administration succinctly in the lead column of his London Times Online article discussing the Olympic Committee’s decision to eliminate Chicago from consideration for the 2016 Olympics despite his controversial trip to Denmark:

“There has been a growing narrative taking hold about Barack Obama’s presidency in recent weeks: that he is loved by many, but feared by none; that he is full of lofty vision, but is actually achieving nothing with his grandiloquence.”

The president’s grandiloquence was exceeded only by his wife’s. She made headlines lamenting the ’sacrifice’ she was making in order to help make Chicago’s dreams come true:

“As much of a sacrifice as people say this is for me or Oprah or the president to come for these few days,” the first lady told a crowd of people involved in the Chicago project, “so many of you in this room have been working for years to bring this bid home.”

One wonders what people were discussing the sacrificial nature of the Obama’s multimillion-dollar tax-payer funded boondoggle to Denmark on? Just the flight on Air Force One cost somewhere between $800K and $1.2 million. And that doesn’t include the First Lady, her entourage, and Cabinet officials who traveled separately at public expense. Figure a couple of million, at least. That’s pretty sacrificial. Especially in a recession with unemployment tapping 10%.

Could it be the sacrifice made by the environment that absorbed the enormous carbon footprint (8,379 metric tons) left by the Obamas and their entourage in getting there? That’s pretty sacrificial, considering the President deposited as much CO2 into the atmosphere in two days as 430 American families generate per year. Especially given that Obama is so dedicated to “cleaning up the environment” that he advocates skyrocketing energy bills for the rest of us to pay for it. 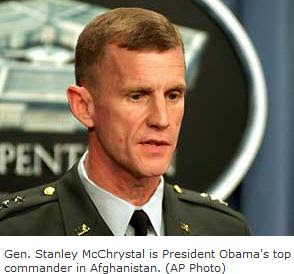 Iran is just about ready to announce it’s entry into the Nuclear Club. General McChrystal, the commander of US forces in Afghanistan, met with the President for the first time in seventy days — and the last time was by videoconference.

McChrystal made the stunning admission on “60 Minutes” in the context of discussing the fact that without the immediate injection of more troops, the war will soon become “unwinnable.” By my informal count, 49 US troops have died in Afghanistan since McChrystal requested the reinforcements.

Boston.com’s Political Intelligence column reported that Obama was able “to squeeze in his first face-to-face meeting” with the General:

McChrystal was summoned from London, where on Thursday he gave a speech warning that the militants are gaining strength and more troops are needed to “buy time” for the Afghan military and police forces to prepare to take control of the country in 2013. He said there is a “huge risk’’ al Qaeda terrorists will again find safe haven in Afghanistan unless new tactics are put in place in the near future.

Obama has given more than 120 major speeches pushing his health care bill. He’s given countless interviews and talk shows — but he’s never met with General McChrystal? Ever? Are you kidding me?

It appears that the administration fears Afghanistan will become another Vietnam, so they are doing all the same things that made Vietnam the foreign policy equivalent to the Boogey-Man. Johnson and Nixon ignored their commanders and ran the war from Washington. And lost it.

Come to think of it, historians say that Nazi Germany would have won World War II if Hitler had listened to his commanders instead of playing armchair general from Berchtesgaden. But he didn’t, (thank God) and he lost, too. But the lesson is obvious.

While all of this was going on, Barack and Michelle were off to Copenhagen, Oprah Winfrey in tow, all of them sacrificing themselves to bring the Olympic circus to Chicago.

Giving rise to my favorite headline of all, the Drudge Report’s: “The Ego Has Landed.”