The Race Is on for EU Power

Big developments are in the news in relation to the revived Roman empire of bible prophecy we commonly refer to as the European Union. Let's get to them.

The following is an excerpt from a BBC article:

Political leaders across the EU have also welcomed the result.

The president of the European Commission, Jose Manuel Barroso, said it was a great day for Europe.

He urged the leaders of Poland and the Czech Republic - the only other countries yet to ratify Lisbon - to sign the treaty as soon as possible.

The treaty - which is aimed at streamlining decision-making in the 27-nation bloc - cannot take effect until all 27 member states ratify it.

According to final results, 67.1% of Irish voters approved it, while 32.9% voted "No". Turnout in the three-million electorate was 58%.

The parliaments of Poland and the Czech Republic have approved the treaty and Polish President Lech Kaczynski is expected to sign it in the coming days.

What is the significance of this to those interested in bible prophecy? Quite simply, it seems probable that this monumental moment in the history of the European Union is finally going to resolve the long-standing question once posed by former U.S. Secretary of State Henry Kissinger: "Who do I call if I want to call Europe?"

Once the Lisbon Treaty is formally accepted, someone is soon afterward going to become the first ever President of the European Union. Not only that, a powerful Foreign Minister's position is going to be filled. At last there will be someone to call representative of a unified Europe, potentially a couple depending on circumstances.

The creation of these two positions within the European Union raises the inevitable question of whether one of these offices will be held by the prophesied Antichrist in the prophetic future. The odds would seem favorable, in my humble opinion, although I'm not dogmatic in that opinion by any means.

By design the Antichrist's identity and the specific path he will follow in ascending to the top of a global government, which is undoubtedly going to be directly tied to today's European Union, is somewhat veiled in secrecy. What we do know of his ascent, ALL WE NEED TO KNOW, is the following: First, the Ground Rules

Before we go any further in discussing the implications of this monumental development in the European Union, what follows below this section of commentary, is going to feature names of those being considered to hold the new and powerful positions ratification of the Lisbon Treaty will bring about but I want to be very clear that nothing featured here is meant, in any fashion, to begin the process of playing 'pin the tail on the Antichrist'.

Those most familiar with my work know that Antichrist speculation is an arena I try and steer clear of, partly because of what I said earlier about the Antichrist's identity being robed in secrecy and partly because there may yet be developments that we can't foresee that may change the dynamics of how the Antichrist will become tied to the hierarchy of the revived Roman empire and make his rise to the pinnacle of the new world order to come.

Many teachers of bible prophecy, whose opinions are worthy of consideration at the very least, based on their discernment on a wide range of issues, believe the ten horns referred to in Daniel's prophecy may be a group that's representative of the international community from the outset, for example. This could occur, which would naturally lessen the likelihood that the Antichrist will hold either the office of President of the European Union or European Union Foreign Minister prior to making his ascent to becoming, essentially, the king of the world.

Remember, everyone. It isn't where the Antichrist comes from initially that is going to flag him as the Antichrist. It's what he is going to DO to fulfill the prophecies listed above that is going to lead to him ultimately become the man in charge of a new world order that will be richly tied to today's European Union, an alliance of 27 member nations (with more on the way), all of whom will soon have ONE president over them all and ONE Foreign Minister.

That 27 nations could have one president and one foreign minister over all its collective citizenry is remarkable in light of what bible prophecy tells us is on its way, namely a global government headed by one man who will be given power "over ALL kindreds, tongues and nations" in the prophetic future. (Revelation 13:7)

Regardless of where the Antichrist comes from in the world or what titles and positions he could post to a resume, the upcoming ratification of the EU's Lisbon Treaty is going to break ground that proponents of a new world order have dreamed of as long as a new world order has been naively imagined as a fix-all solution to the world's problems.

So what am I saying here? Beyond any doubt, these developments are of great prophetic significance whether the Antichrist to come holds one of these soon-to-be-created positions of power in the European Union prior to fulfilling bible prophecy or not as the world has never been as close to having a new world order than it will be the instant the Lisbon Treaty is ratified, which is reportedly going to happen mere days from now. 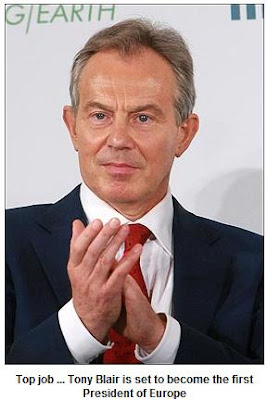 The Race Is on for EU Power

The mad scramble to see who will become the George Washington of the European Union is on with many sources indicating it's almost a certainty that former British Prime Minister Tony Blair, who has most recently been serving as an envoy for the Middle East Quartet comprised of the EU, Russia, the United Nations and the United States, is going to get the honor.

Interestingly, demonstrative of the nature of the Beast government rising in Europe, the EU's citizens will have no say in deciding who will lead them. Rather, the leaders of the European Union will make the choice for them. For whatever reason, it seems Blair is the hands down favorite. French Foreign Minister Bernard Kouchner, when recently asked if Blair was the only candidate for president of the EU, replied, "For the moment, indeed."

If selected, Blair will, in all likelihood, become suspect #1 to be revealed as the prophesied Antichrist in the prophetic future, especially in light of the role he has been playing in the Middle East since 2007 but, once again, I caution my readers against spreading a theory of that variety. We need to stick to God's Word and let events on the ground speak for themselves, no matter who is named EU president and there are possibly others in the hunt for the job. Contradicting the assessment that Blair is the only candidate for EU president, EUBusiness.com is reporting that Luxembourg Prime Minister Jean-Claude Juncker, his Dutch counterpart Jan Peter Balkenende, and former Irish President Mary Robinson are potential candidates as well. It will prove interesting to see how that plays out.

Where the EU's first Foreign Minister position is concerned, the official title of which has been changed on a number of occasions, there doesn't seem to be a strong front-runner for the position. A laundry list of EU notables are being considered for that role. Of interest to me, EUBusiness.com doesn't even mention the EU's current foreign policy chief, Javier Solana, as a candidate for that position so who knows who will occupy that powerful office for the very first time? Regardless of who gets the position, as I have noted in previous commentaries, the appointed head of EU foreign policy may be someone just as interesting to keep an eye on as the EU president as the EU's vision for that position is grandiose by definition.

On the topic of what was initially being referred to as the position of EU Minister of Foreign Affairs in the now-defunct EU Constitution, which was merely repackaged as the soon to be ratified Lisbon Treaty, the EU's purpose in creating this position was to "give the EU a higher profile in the world and a single human face to represent it in international relations."

Keep looking up! Jesus Christ is Lord and He is coming soon!