The Republic of Ireland went to the polls yesterday to vote on whether or not the country should adopt the Lisbon Treaty. Ireland is the only country in Europe that is required by law to hold a public referendum on changes to its constitution. The original draft of the EU Constitution was initially rejected by the country last year. Many thought that by signing up to the Charter on Fundamental Rights, it would become easier for the European Union to force through laws legalizing abortion in Ireland. The country's traditionally neutral status might also be compromised if Irish soldiers were asked to take part in a European army.

Following the constitution's rejection, the European Commission assured Irish voters that these things would not be affected, but these guarantees were not written into the treaty text, meaning that Ireland is being asked to vote again on what is essentially the same document.

Others rejected the constitution because it threatens to dilute Irish sovereignty, and in the words of one British Labour MP, create a "democratic deficit" in Europe with those in positions of power being unelected and unaccountable to the European populace.

Last night the treaty was approved by the Irish electorate with a majority of around 67%, paving the way for ratification in the two remaining states. And now the European Union is preparing for its eventual adoption by selecting the person who will become the first permanent president of the European Union.

"The former British leader is a prime choice for those who want "Mr Europe" to have global recognition factor and a touch of the kind of leadership charisma that is not traditionally associated with the EU. 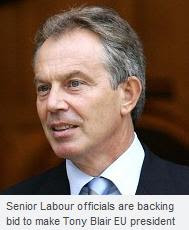 British officials are bullish that Mr Blair "may well" be anointed as the EU's first president, with French support and lukewarm German consent, at an EU summit on October 29.

The job description, along with salary, terms and conditions, remains unwritten and the text of Lisbon Treaty is not illuminating when describing the new role or its powers. To a great extent the personality will shape the post and if Mr Blair is the chosen one then he will have a massive influence on shaping a presidency that will rival national leaderships and overshadow the EU.

Other Brussels institutions, especially the European Commission, are intensely aware that if Mr Blair takes the job, which does not require a popular election or vote, the EU will never be the same again. Power will shift irrevocably to the Council of the EU, which represents national governments and lead to the creation of Europe as continental bloc to rival the United States and China.

The Commission will be left its internal role as policeman of the single market while President of the Council becomes an international colossus.

Unfortunately the Telegraph have hit the nail on the head. I couldn't think of a more charismatic personality to lead the EU than the former British Prime Minister.

When he first became prime minister of the United Kingdom, people used to refer to him as 'Mr President' because of the manner in which he ran the country. One of the first things Blair did upon taking office was to reduce the amount of time given to Prime Minister's Questions, thus limiting his accountability to parliament and the people. He recruited more spin-doctors to manage the media than any previous British government. And he brought Britain into a war with Iraq without obtaining the consent of parliament, which decision eventually led to his downfall.

Of course he did leave his 'legacy' behind him. He helped to secure a measure of peace in Northern Ireland, and now hopes to repeat that achievement in the holy land through his role as Special Envoy for the Middle East Quartet.

There is no doubt Blair has the makings of a president in the eyes of the world, and I emphasize, 'in the eyes of the world'. He is a good orator and is well known on the international stage. But it takes more than just fair speeches to make a president. As the Scripture states, those that rule over men must be just, ruling in the fear of God (2nd Samuel 23:3). I cannot judge Blair's character or motives. And I don't know whether he is a saved man or not. Only God knows. But I do know that he has brought some very unholy laws into this country, and any person who passes laws that are contrary to God's Word cannot be said to be ruling in the fear of God.

The Bible predicts that in the last days, a great leader will arise out of the revived Roman Empire (Daniel 9:26), who will command the attention of the entire world (Revelation 13:3). This leader will be a great orator who will speak blasphemies against God and against His people (Daniel 7:25, Revelation 13:5-6). He will seek to change times and laws (Daniel 7:25), and will preside over the dividing of the land of Israel (Daniel 11:39). But the world will not care what policies this leader stands for, so long as he can unite the people and solve their economic problems.

Dr Paul-Henri Spaak, the first president of the UN General Assembly, once said, "We do not want another committee, we have too many already. What we want is a man of sufficient stature to hold the allegiance of all people, and to lift us out of the economic morass into which we are sinking. Send us such a man, and be he God or devil, we will receive him".

As you can see, with the passing of the ratification of the Lisbon Treaty in Ireland, the world is one step closer towards the fulfillment of these prophecies.

But there is hope. There is another who has been chosen to fill this position. He has been elected by God (1st Peter 2:6). He does not judge after the sight of the eyes or the hearing of the ears, but He is just and in righteousness He judges and makes war (Revelation 11:19). He is the only one who can bring true justice and lasting peace to this fallen world (Isaiah 11:3-5, 9:6-7).

Therefore thus saith the Lord GOD, Behold, I lay in Zion for a foundation a stone, a tried stone, a precious corner stone, a sure foundation: he that believeth shall not make haste (Isaiah 28:16).

That person is Jesus Christ. He is the Stone of Israel (Genesis 49:24) which the leaders of the nation rejected (Matthew 21:42). He is the one who was tempted by the devil after He fasted in the wilderness, and yet was without sin (Hebrews 4:15). He is the one that was tried by both Caiaphas, Pilate and Herod, who could find no fault in Him (John 19:6). He was the one who was tested when He was on the cross of Calvary, and was able to exhaust the wrath of God against sin (Isaiah 53:11). He has passed every test. He is the sure foundation that is worthy of our trust (Psalm 40:2).

The question is, have you believed on Him for the forgiveness of sins? The verse says those who put their trust in Him shall not be moved (Psalm 62:5-6). Believe on Jesus Christ for salvation today.

I am come a light into the world, that whosoever believeth on me should not abide in darkness. And if any man hear my words, and believe not, I judge him not: for I came not to judge the world, but to save the world (John 12:46-47).

If Tony Blair is made President of Europe, the EU will never be the same again - Telegraph

Czech republic to ratify Lisbon Treaty eventually, but with some hagglings - Xinhua