In today's news came a very surprising yet interesting revelation that the anti-semitic Iranian President Mahmoud Ahmadinejad was actually a Jewish convert to Islam. This revelation came in the form of an article from the Jerusalem Post which detailed the Iranian president showing his "identification" card. The article reports: 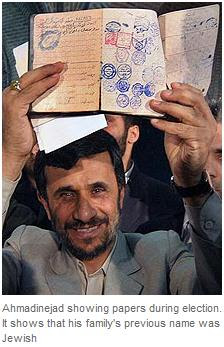 Iranian President Mahmoud Ahmadinejad was born Jewish and converted to Islam, according to a report in London's Daily Telegraph. The Saturday report cited a photograph from 2008 which showed Ahmadinejad holding up his identity card, bearing his former last name, Sabourjian, a common Jewish name in Iran.

The Telegraph said that the name was "Jewish" for cloth weaver, and that the Iranian president's family had changed their name when they converted to Islam. "The name derives from "weaver of the Sabour," the name for the Jewish Tallit shawl in Persia," the report said.

For me it is mind-boggling that a person born Jewish like Ahmadinejad could have so much hatred towards his own original people and ancestors. Yet when we fully understand the hatred and twisted logic behind Islam then we can finally understand how this can become a reality.

The article went on to talk about the psychological impact of converting to Islam (or any other religion) might have on an individual. The article detailed that it is common for converts from one religion to another to attack and condemn their original religion. This is of itself a form of pride and as we know was likely the first sin committed in history when Satan became full of himself in Heaven. We can all look at Iranian president Ahmadinejad and know that he has an issue with pride. Like Satan, I'm afraid that Ahmadinejad will have his day of judgment and perhaps soon if Israel strikes Iran's nuclear program. Ahmadinejad is just the type of leader that Iran needs to lead it into the Ezekiel 38-39 scenario.

In another article the prideful Ahmadinejad asserted that US President Obama was wrong to accuse Iran of hiding their recently revealed second nuclear enrichment facility. The fact is that even IAEA chief ElBaradei admitted that Iran was "on the wrong side of the law" when they did not report the facility when they started building it. The Haaretz news website reported:

Iran's president says President Barack Obama made a big mistake when he accused the country of hiding a newly revealed nuclear site that Iran claims it reported to the UN nuclear watchdog within the necessary timeframe. 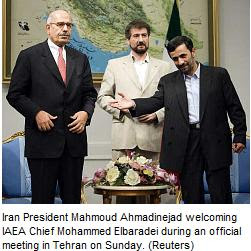 Mahmoud Ahmadinejad's comments Saturday come just before the head of the International Atomic Energy Agency, Mohamed ElBaradei, is scheduled to arrive in Iran to discuss the uranium enrichment facility near the holy city of Qom.

ElBaradei recently said Tehran was "on the wrong side of the law" over its new plant. He said Iran should have revealed its plans as soon as it decided to build the facility - a position backed by the U.S. Ahmadinejad said Iran revealed the facility to the IAEA on Sept. 21, four days before Obama denounced Tehran.

The UN's nuclear watchdog has confirmed that its director general will visit Iran this weekend.

So we can see once again that despite being completely out of line with the rest of the world, the Iranian president asserts his prideful yet wrong view of things. This is of course becoming the norm in Iran and is of no surprise to any of us. Just when you thought the Iranians couldn't outdo themselves on the ridiculous side of things, they come up with something even more ridiculous. It is my opinion that ElBaradei will meet with the Iranian leadership and basically get nowhere with them on complying with current UN resolutions to stop their nuclear activities. It is looking more likely with each passing day that the world community seems to be set on doing nothing but passing toothless sanctions and jawboning with the Iranians. While at the same time the Iranians keep making progress with their illegal nuclear activities. A day of reckoning may soon be in store for Ahmadinejad and Iran as Israel watches the situation intensely from the political sidelines.

Finally, in another article from the Haaretz news website a commentary was posted that was entitled "Washington doesn't get it: Iran just wants the bomb". The article reports:

Over the summer, U.S. Vice President Joe Biden boldly asserted that Israel, "as a sovereign nation," has the right to protect itself against a nuclearizing Iran. In law, the precise protective action that Biden had in mind is called "anticipatory self-defense." Now, however, official Washington is offering Jerusalem much less audacious "advice" than undertaking a permissible preemption. In essence, the current and still plainly futile message is "tougher sanctions."

On several occasions, the "international community" has imposed "serious" sanctions against Iran. Nonetheless, uranium enrichment has only accelerated in that country. At no time, in fact, has Tehran shown even the slightest inclination to value a promised proper place in the world higher than simply getting "the bomb." Once again, Washington just doesn't get it.

This is really the sum of the Iranian situation in a nutshell. While the commentary title focuses on Washington not getting "it", I am also inclined to lump the rest of the world in with Washington. I truly do not understand how the world community can just sit on their hands and allow a rogue terrorist supporting state that is driven by a dangerous radical theology like Islam to obtain nuclear weapons.

These are the same Iranians that are driven by it's president who is a member of an Islamic sect that is wanting some sort of apocalyptic showdown in order to bring about their "messiah" figure also known as the "Mahdi". This sort of delusional nonsense should awaken even the most politically dead country and spring them into action. But no, that is sadly not the case today. The world community appears to be in a political coma that has basically rendered them paralyzed to doing anything about Iran.

In my opinion the current situation with Iran is worse than the situation with Hitler in WW2 in that the weapons that Ahmadinejad will have at his disposal are of the worse kind imaginable. Hitler could only dream of such weapons in his lifetime, but Ahmadinejad is just mere months away from possibly obtaining these weapons if they are not stopped. And once again, the world community operating with the spirit of Neville Chamberlain sits around in a political fog not realizing or not wanting to realize the danger of a nuclear Iran.

Never before has such an apocalyptic group of people ever come this close to obtaining the worse weapons in the world and threaten the very existence of a democratic state like Iran has done with Israel. If there was ever a time for the world community to act collectively and in unity, it is now. We are seeing today that man never seems to learn from his past mistakes and is oftentimes prone to repeat them. And sadly that mistake will likely culminate in WW3 as the Ezekiel 38-39 scenario is fulfilled.

The time is clearly upon us when the window of opportunity for stopping Iran from achieving their nuclear dreams and aspirations is going to close shut permanently. Will the world community rise to the occasion or will Israel be left to handle the situation on their own? Sadly, I think we all know the answer. I do not believe that the world will lift a single finger to stop Iran and Israel will be left to do the dirty deed of stopping Iran even if it is only temporarily.

Israel's motto is "never again" after the Holocaust. I would tend to think that the time clock is finally about to go off for Iran. Let us keep watching and looking up, as the Lord told us that when these things come to pass, that our redemption draws nigh.

Until next time, God bless.