December 6-18th, the nations of the world will meet in Copenhagen for a so-called "climate change" summit. Nations will sign a treaty, which in the US must be ratified by the Senate, to save the world against global warming, now expanded to climate change, which would take into account both global warming and global cooling. This treaty will establish a global organization called the Conference of Parties, or COP, that has loosely defined taxing and policy authority over all the nations that belong to the COP. The concept of the COP is to tax the rich nations to pay for the poor nation's inability to be good stewards of their environment. This treaty will take from the wealthier nations and give to the poor nations. 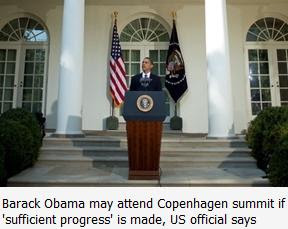 Page 8, Section 10 of the treaty states that "an economic transition is needed" to adjust "global economic growth patterns" towards a sustainable low-emission economy based on development of innovative technologies, more sustainable production and consumption, "promoting sustainable lifestyles" and climate-resilient sustainable development "while ensuring a just transition of the workforce." It says,

"The active participation of all stakeholders in this transition should be sought, be they governmental, including subnational and local government, private business or civil society, including the youth and addressing the need for gender equity."

"In this context, developed country Parties should demonstrate that they are taking the lead in modifying the long-term trends in emissions reduction consistent with the objective of the Convention and in accordance with its provisions and principles. In doing so, Annex I Parties pledge to meet their targets fully, effectively and in a measurable, reportable and verifiable manner."

The United States is considered an Annex I country. And this 179 page treaty commits America to a global socialist redistribution of wealth, ensuring "just transition in the workforce," and active participation on the part of "the youth and addressing the need for gender equity."

This treaty is expected to be signed by the man who occupies the Oval Office. It commits the United States, its states and local governments, its private businesses and its youth to an unconstitutional worldwide socialist governance under the guise of saving the world from the climate. This unprecedented abrogation of US sovereignty could ultimately do away with your Constitutional rights to free speech and freedom of religion.

Revelation 13:7 speaks of the antiChrist in a world government, saying,

"And it was given unto him to make war with the saints, and to overcome them: and power was given him over all kindreds, and tongues, and nations."

The prophecy clock will tick forward when this treaty is signed.

Gearing Up for the Copenhagen Climate Conference - Heritage.org

Obama plans to sign over control of US - Canada Free Press