The Battle is Over? — Bishop Spong Exits the Debate

"The battle is over. The victory has been won. There is no reasonable doubt as to what the final outcome of the struggle will be." Those are the words of John Shelby Spong, the retired Episcopal bishop of Newark, New Jersey. In his recently released "manifesto," Bishop Spong declares, "it is time to move on" and pledges never again to debate the issues of homosexuality or homosexual rights.

John Shelby Spong's new manifesto is a sign of the times. For the past three decades, Bishop Spong has staked out a theological position that is so far outside the realm of Christian orthodoxy that it defies description. In a succession of notorious publications, Spong has denied virtually every conceivable doctrine and has embraced almost every imaginable heresy. His abandonment of biblical Christianity is both intentional and straightforward - what this bishop demands is nothing less than the total reformulation of the Christian faith. In other words, Bishop Spong would replace Christianity with a new post-Christian religion while continuing to be recognized as a bishop of the Episcopal Church. 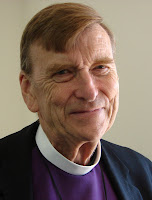 An ardent proponent of gay rights and the total normalization of homosexuality, Bishop Spong has long pressed for same-sex unions and the ordination of practicing homosexuals to every office in his church. In his new manifesto, he simply declares victory for his cause. Though skirmishes in many churches and denominations continue, the bishop is convinced that the final outcome of the struggle is clear:

"Homosexual people will be accepted as equal, full human beings, who have a legitimate claim on every right that both church and society has to offer any of us. Homosexual marriages will become legal, recognized by the state and pronounced holy by the church."

In an act of individual self-assertion, Spong simply declares that he no longer needs "a majority vote of some ecclesiastical body" in order to bless or ordain gay and lesbian people throughout the life of the church.

"The battle in both our culture and our church to rid our souls of this dying prejudice is finished," he asserts. "A new consciousness has arisen. A decision quite clearly has been made. Inequality for gay and lesbian people is no longer a debatable issue in either church or state."

In the most interesting section of his manifesto, Bishop Spong announces that he will no longer debate the issue of homosexuality with anyone.

"I have been part of this debate for years, but things do get settled and this issue is now settled for me," Spong explains. "I do not debate any longer with members of the 'Flat Earth Society' either."

Indeed, Spong has been a participant in debates over homosexuality for the last quarter century. Now, he simply announces that he will no longer debate the issue because he is no longer even willing to admit that there are two sides to the debate. I suppose I should not have been surprised to find my name listed among those he will never again debate.

"I will no longer engage the biblical ignorance that emanates from so many right-wing Christians about how the Bible condemns homosexuality, as if that point of view still has any credibility."

Of course, Bishop Spong rejects any claim that the Bible is the Word of God. He knows full well that the Bible comprehensively condemns homosexuality in any form as sinful, so when he refers to "biblical ignorance" he is referring to those who would understand the Bible to be the binding authority for the church. Belief in the Bible as the revealed Word of God, he makes clear, is simply ignorant.

One section of his manifesto reeks of unintended irony. He simply declares that the global debate over homosexuality has been terminated.

"The world has moved on, leaving these elements of the Christian Church that cannot adjust to new knowledge or a new consciousness lost in a sea of their own irrelevance. They no longer talk to anyone but themselves."

The obvious irony is this - the churches and denominations that have most eagerly embraced the normalization of homosexuality are also those losing members by the millions. While the Episcopal Church in the United States is following the dictates of Bishop Spong and his apostate colleagues, that denomination has lost entire dioceses, along with a huge swath of its membership. Meanwhile, the conservative and orthodox churches in the Anglican Communion are thriving, growing, and emboldened. So, which churches are "lost in a sea of their own irrelevance?"

Bishop Spong clearly hopes that his new manifesto will bring all debate over homosexuality to an end. Not hardly. While the bishop's manifesto is written in the language of bravado, it actually represents an intellectual posture of surrender. Worldwide, the percentage of churches and denominations that have embraced Bishop Spong's position on homosexuality is infinitesimally small. The Episcopal Church has taken radical steps to abandon biblical sexuality, but even within that denomination the debate over sexuality is hardly over.

And so, Bishop Spong exits the debate. And yet, given what we have come to expect of John Shelby Spong, I'm betting we haven't heard the last from him yet.

What God Thinks of Homosexuals - Grace to You (John MacArthur)

Welcome to the school of social engineering - RenewAmerica