Last Thursday, National Security Adviser General James L. Jones declared that nothing was going to stand in the way of the creation of a Palestinian state. Speaking of the Israel-Palestinian conflict at the Fourth Annual Gala of the American Task Force on Palestine, Jones said,

“The time has come...to relaunch negotiations without preconditions to reach a final status agreement on two states.”

Jones emphasized the President’s personal commitment to this resolution:

“President Obama’s dedication to achieve these goals is unshaken, is committed, and we will be relentless in our pursuit of achieving these.”

“Without preconditions.” It was a telling indication of how far the Obama presidency has departed from the ringing declarations of Obama the candidate, who stated in a major address to the American Israel Political Action Committee (AIPAC) on June 4, 2008 that “we must isolate Hamas unless and until they renounce terrorism, recognize Israel’s right to exist, and abide by past agreements. There is no room at the negotiating table for terrorist organizations.” He even said that “the Palestinian people must understand that progress will not come through the false prophets of extremism or the corrupt use of foreign aid.” 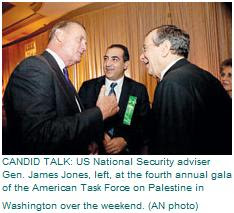 But speaking at the ATFP gala last week, Jones said nothing about isolating Hamas until they renounce terrorism. Not a word about the need for Hamas or any other Palestinian entity to recognize Israel’s right to exist. Nothing about compelling the Palestinians to abide by past agreements, which they have routinely violated. And Jones was entirely mum about the necessity for the Palestinians to renounce “the false prophets of extremism,” of which they are obviously still quite enamored.

Obama said different things at AIPAC last year. He did call for the creation of a Palestinian state, but at the same time he denounced “terrorist groups and political leaders committed to Israel’s destruction” and “maps across the Middle East that don’t even acknowledge Israel’s existence, and government-funded textbooks filled with hatred toward Jews.” He spoke indignantly of the fact that “Israeli children have to take a deep breath and summon uncommon courage every time they board a bus or walk to school.”

How will Obama’s “relentless” pursuit of a Palestinian state, “without preconditions,” guarantee the safety of those Israeli children? It was noteworthy that the day after General Jones assured the ATFP crowd that that state would be established, Hamas’s Al-Aqsa TV broadcast a children’s program, “Tomorrow’s Pioneers,” that featured a Palestinian child expressing a desire to become an English teachers in order “to teach children the language of their enemy.” Then a recurring character on the program, Nassur the bear, chimed in:

That Palestinian children are being taught that the U.S. and Israel are the “enemy” is no surprise, but it came last week as yet another indication of just how disconnected from reality is the Obama administration’s policy. General Jones, according to an ATFP press release,

“said that ending the conflict and the occupation is essential because what is at stake is ‘nothing less than the dignity and the security of all human beings.’”

But Obama and Jones manifest a singular myopia about which side is threatening that dignity and security when only one side is teaching its children that the other is the “enemy” - a sentiment that is in any case hardly compatible with the new era of peace that is supposed to dawn with the establishment of this state. Will the Palestinians cease to regard Israel and the U.S. as their “enemies” once this state is established? Will they begin to teach their children peace and tolerance? Will they renounce the jihad doctrine that will settle for nothing less than the entire destruction of Israel, as their leaders have repeated on numerous occasions?

The real answer to all those questions and others like them is “no,” but even worse is the fact that Obama and Jones are not asking them. They appear to be determined to establish a Palestinian state despite the abundant evidence that the Palestinians have not renounced their jihadist intransigence, and will use a new Palestinian state as a terror base from which to launch new attacks against the “Zionist entity” - just as Israel’s withdrawal from Gaza did not usher in the promised new era of peace, but only more jihad.

Obama and Jones should know better. And probably do.