"The chief function of propaganda is to convince the masses, whose slowness of understanding needs to be given time so they may absorb information; and only constant repetition will finally succeed in imprinting an idea on their mind." - Adolph Hitler, Mein Kampf (1925)

Hitler came to power in 1933 on a plurality vote of 43.9% which gave the Nazis the majority of seats in the German Parliament. Through the use of various contrived crises, Hitler managed to consolidate his power by seizing control of the German mainstream media.

All means of communication were monopolized by the government. The media and movies had to show pictures glorifying the Nazi movement and its illustrious leader. The Ministry of Propaganda, Josef Goebbels, had two main tasks:

But before he could eliminate the opposition, he had to first get the man on the street on his side. Those who held the ‘right’ views were rewarded with status and inculcated with a sense of privilege.

Anyone who disagreed with the Reich was demonized as a liar, an agent of the Jews, or a tool of the special interests. Goon squads would show up at opposition rallies and provoke confrontations while the media portrayed the rallies and their participants as “angry mobs.”

The Nazis also used the public school system to indoctrinate the next generation of Nazis. Parents who tried to teach their own values were denounced by their children. Politically incorrect views were criminalized. Opposing viewpoints were heavily censored.

To ensure that everybody thought in the correct manner, Goebbels set up the Reich Chamber of Commerce in 1933. This organization dealt with literature, art, music, radio, film, newspapers etc. To produce anything that was in these groups, you had to be a member of the Reich Chamber.

The Nazi Party decided if you had the right credentials to be a member. Any person who was not credentialed was not allowed to have any work published or performed.

The aim of censorship under the Nazi regime was simple: to reinforce Nazi power and to suppress opposing viewpoints and information. Punishments ranged from banning of presentation and publishing of works at first; then later, deportation, imprisonment and even execution.

Eliminating the opposition always followed the same formula; denounce, demonize, marginalize, and neutralize. Sort of along the lines of the way the Obama administration does it, but not quite as subtle.

On CNN, by contrast, there was a 22-point disparity in the percentage of negative stories on Obama (39 percent) and McCain (61 percent). The disparity was even greater at MSNBC, according to Pew, where just 14 percent of Obama stories were negative, compared to a whopping 73 percent of McCain stories — a spread of 59 points. 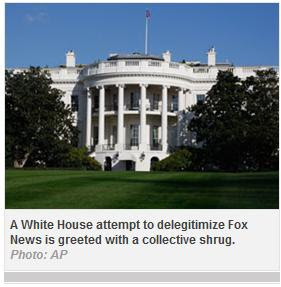 Because the Obama administration is a political entity made up of hundreds of individuals and not just Barack Obama himself, one must assume that there is some kind of political strategy behind the administration's declaration of war against Fox News.

It has to be more than pettiness. Even among Democrats. One pretty much has to assume that not all of them are clinically deranged. And they can't all be that stupid. Fox News reaches more Americans on any given day than all the rest of the networks combined.

And if there is one thing that the administration's very public declaration of war means is that Fox's ratings will only go up in direct proportion to the level of public conflict.

The White House has very publicly assigned Anita Dunn to fact-check Fox News' Glenn Beck. Beck responded (brilliantly, I thought) by installing a hotline on his set and giving Dunn the phone number.

Robert Gibbs mentions Fox News at almost every opportunity; the president himself has publicly identified Fox News as his principle antagonist. A few weeks ago, Obama conducted what they called a 'Sunday blitz' appearing on all major network news programs except Fox.

The administration has declared Fox News off-limits to all its senior members - again, very publicly - as a form of 'punishment' for what the administration is now calling 'outright lies and distortions' but without offering to either provide examples or correct the allegedly distorted record.

It is hard to imagine that the administration really believes that it can 'break' Fox News and convince it to parrot the party line the way that CNN and the major networks do in exchange for access.

And by attacking Fox, it has to know that it is alienating itself further from Fox's core audience. The very audience the administration needs to persuade. What's up with that?

That the mountains of evidence being heaped up by Glenn Beck, for example, are all Republican lies. By repeatedly denouncing them as liars and demonizing them as Republican shills, they hope to marginalize Fox in the eyes of all but the most devoted viewers, thereby neutralizing the threat posed to the administration's agenda.

When a government denounces an opposing point of view as being "against the state" and then actively discriminates against that point of view, that's called 'censorship'. The Obama administration has unleashed the full force of the federal government against the Fox News Channel.

TIME Magazine is anything but conservative-friendly. But even they couldn't help but wonder what Obama is hoping to gain.

It may be that, by seeking out a controversy that will get a lot of press (the media loves a "fight" with antagonists, which is why it's important to call out Fox by name), the Administration wants to plant a seed in assigning editors' and producers' minds, to make them more likely to look at these stories with suspicion or think twice about giving them credence simply because they're on an endless loop on Fox.

TIME even noted the stories Fox reported that nobody else would report.

The Administration, openly and not so openly, has been annoyed with the mainstream press (I know, I know, but I have to call it something) for picking up stories driven by Fox News, its hosts and various conservative media outlets — the town hall protests, the ACORN-pimp videos, the schoolteachers-are-brainwashing-kids-with-Obama-songs videos or what have you.

What I found most astonishing is the matter-of-fact way that the mainstream media is dealing with it.

Is it just me or is anybody else shaking their heads at the cheerful admission that the mainstream media actively suppresses news that doesn't favor the administration unless they are forced to in order to compete with Fox?

I used to think, "it can't happen here." It's already happened. Even as I was watching it all unfold, right before my eyes.

And I still can't quite believe it.