The VeriChip Corporation, which manufactures the implantable RFID identification tag, has acquired licenses to produce a chip which will be able to sense the presence of a virus, among other things, within the human body. VeriChip has teamed up with another company by the name of Receptors LLC, which specializes in systems that can detect the presence of specific pathogens in the bloodstream. A few years ago, the firm patented a modification of the VeriChip implant which could gauge the level of glucose in the body, which could be a major benefit to sufferers of diabetes. Now they hope to take that concept one step further, by producing a chip which could detect pathogens such as Staphylococcus aureus and even variants of the dreaded H1N1 virus, also known as Swine Flu.

The company has developed several applications of their brand. Hospitals using the VeriMed system are able to gain immediate access to a patient's health records. A few years ago, around 200 Alzheimer patients were implanted with the chip in a trial for Roam Alert, a programme designed to increase security for sufferers of the disease. There was even talk about chipping the US Army and illegal aliens.

Following the Asian Tsunami in 2004, some in the press suggested a lot of time could have been saved had the chip been in widespread use at the time of the disaster. The company's VeriTrace system was used to help categorize the remains of the dead following Hurricane Katrina. Now the firm is seeking to cash in on public fears over the Swine Flu pandemic, by developing an implant which could be used to detect the presence of a virus in the human body.

"As we continue to build on our partnership with Receptors, which started with the development of a glucose-sensing RFID implantable microchip, we are moving beyond patient identification to sensors that can detect and identify illnesses and viruses such as influenza," said Scott R. Silverman, chairman of VeriChip, in a statement. "This is an exciting next step for the future of our healthcare division."

It's not the first time that RFID has been touted as a possible solution to combating the spread of disease. In November of last year, the city of Boston launched a trial in which hundreds of people were given RFID bracelets, with the purpose of identifying those who had received an inoculation to a flu pandemic. The location of those fitted with the bracelets could then be tracked by computer, and areas of the city which had not yet received the injection could quickly be identified. Of course the success of such an endeavour very much depends on the willingness of the public to forfeit their civil liberties for the 'greater good'.

Infectious disease specialists in Boston and elsewhere predicted that the registry approach could prove even more useful if something more sinister strikes: a bioterrorism attack or the long-feared arrival of a global flu epidemic. In such crises, the registry could be used to track who received a special vaccine or antidote to a deadly germ. "Anything you can do to better pinpoint who's vaccinated and who's not, that's absolutely vital," said Michael Osterholm, director of the Center for Infectious Disease Research & Policy at the University of Minnesota. "I wish more cities were doing this kind of thing." 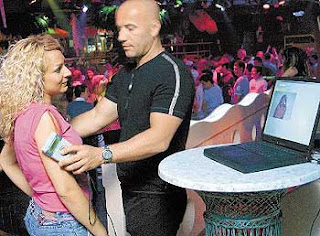 Privacy fears and connotations with the Mark of the Beast have largely prevented VeriChip from making a profit. Although VeriChip is already used as a method of payment in places like the Baja Beach Club, with the tag being inserted into the right upper arm or right wrist of guests, it seems that its makers had chosen not to publicly pursue the obvious financial applications of their product. But that looks set to change as the implant gains a wider acceptance in the public arena through its benevolent medical appliances. VeriChip is now considering branching out into the more lucrative security and personal identification fields, and has bought over the Steel Vault company, a provider of identity security products and services for consumers and businesses.

Commenting on the transaction, Mr. Silverman stated, "We believe the acquisition of Steel Vault will provide a powerful platform to differentiate ourselves among both the consumer and medical community. PositiveID will be the first company of its kind to combine a successful identity security business with one of the world's first personal health records through our Health Link business. PositiveID will address some of the most important issues affecting our society today with our identification tools and technologies for consumers and businesses." Continued Silverman, "VeriChip will be able to market its personal health record offerings to the rapidly growing customers of Steel Vault, while Steel Vault should be able to further expand its customer base by offering a unique suite of both security and healthcare offerings.

As we focus on securing consumers' financial information and addressing the critical need for secure, online personal health records, we believe we are well positioned to benefit from federal stimulus funding. We will keep patients involved in their health care as medical records migrate to the Internet."

As you can see, all the technology required to implement the Mark of the Beast is already here. And the only thing that has prevented governments from implementing such a system is public revulsion at the idea of being implanted with a microchip, and the fear of it being abused by those who hold power. The Bible states it will be the False Prophet, a world religious leader who will arise during the tribulation period, who will enjoin all to receive an identifying mark in their right hands or foreheads. And that no man should buy or sell without having the Mark of the Beast, or the name of the Beast, or the number of his name (Revelation 13:16-18).

Like PositiveID and the Boston bracelet trial, the aim of this mark will be to positively identify those who will be loyal to the Antichrist and his system. Those who refuse to comply will be considered a threat to society. They will not be permitted to buy or sell anything. Throughout the book of Revelation, acceptance of the Mark goes hand in hand with obeisance to the Antichrist, and those who refuse to worship him will be executed (Revelation 13:15). But there is a fate worse than death. And it is the severity of this fate that causes an angel to fly through the midst of heaven to warn those who dwell on Earth not to take the Mark of the Beast.

"And the third angel followed them, saying with a loud voice, If any man worship the beast and his image, and receive his mark in his forehead, or in his hand, The same shall drink of the wine of the wrath of God, which is poured out without mixture into the cup of his indignation; and he shall be tormented with fire and brimstone in the presence of the holy angels, and in the presence of the Lamb: And the smoke of their torment ascendeth up for ever and ever: and they have no rest day nor night, who worship the beast and his image, and whosoever receiveth the mark of his name" (Revelation 14:9-11).

But you don't need to worry about VeriChip or any Mark of the Beast, not if you are a born again Christian. Although I believe the Lord will come to take us home before the tribulation begins, even if we had to go through it, we still would not have to worry about the Mark. For the book of Revelation states that the names of those who will accept the Mark have not been written in the Lamb's book of life (Revelation 13:8).

I know that my name is written down, so I have this assurance from God that I will never accept the Mark. Is your name written in the Lamb's book of life? Are you sealed by the Holy Spirit of God unto the day of the redemption (Ephesians 4:30)? Or will you receive the seal of the Antichrist in your right hand or forehead, showing that you belong to him, spirit, soul and body? Satan has no power over you when you are under the blood of the Lamb. Turn away from your sins, and trust in the Lord Jesus Christ for salvation today.

"Behold, I give unto you power to tread on serpents and scorpions, and over all the power of the enemy: and nothing shall by any means hurt you. Notwithstanding in this rejoice not, that the spirits are subject unto you; but rather rejoice, because your names are written in heaven" (Luke 10:19-20).