Ahmadinejad and the 12th Imam

Since September 2006, I have been urging Western journalists to ask Iranian President Mahmoud Ahmadinejad on the record about his beliefs in the “Twelfth Imam” and about the implications of his annual prayer at the U.N. asking for Allah to “hasten” the arrival of the Islamic messiah, also known as the “Mahdi.”

For years, no American or British journalist has asked such questions, despite the importance Ahmadinejad’s eschatology plays in Iranian foreign policy. This year, with a nuclear showdown intensifying, journalists from Time, Newsweek, AP, CNN and NPR all were given lengthy sit-down interviews with the Iranian leader. But for yet another year, none of them asked questions about his religious beliefs.

However, after scouring the transcripts of all these and many other Western news reports over the past few days, I found a surprise at the end of the full transcript of NBC’s Ann Curry exclusive sit-down interview in Tehran last week. She actually did ask two important questions about the 12th Imam, becoming the first American reporter to do so. However, NBC has thus far failed to report the story. Neither NBC Nightly News nor the Today Show included Curry’s questions or Ahmadinejad’s answers in their respective reports on Thursday night and Friday morning. Nor have NBC publicists highlighted the eschatology questions and answers for other reporters or the public. 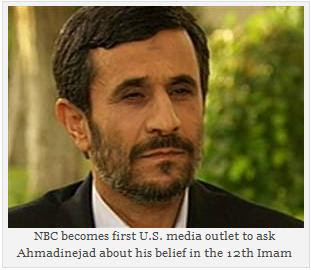 Did NBC’s producers and editors not find the exchange interesting? Why haven’t they asked experts to analyze Ahmadinejad’s answers, and to explore his religious beliefs more in-depth? I commend Ann Curry for asking these questions. What’s more I encourage her to follow the story. It’s an intriguing one — and an important one — and she’s ahead of the pack on this.

NBC’s Ann Curry: In your speeches, you pray for God to hasten the arrival of the hidden Imam, the Muslim messiah. Would you tell us, as I know you will speak about this at the general assembly, as well. What is your relationship with the hidden Imam, and how soon do you think before the second coming?

President Ahmadinejad: Yes, that’s true. I prayed for the arrival of the 12th Imam. The owner of the age, as we call him. Because the owner of the age is the symbol of the – justice and brotherly love prevailing around the world. When the Imam arrives, all of these problems will be resolved. And a prayer for the owner of the age is nothing but a wish for justice and brotherly love to prevail around the world. And it’s an obligation a person takes upon himself to always think about brotherly love. And also to treating others as equals. All people can establish such a connection with the Imam of the age. It’s roughly the same as the relationship which exists between Christians and the Christ. They speak with Jesus Christ and they are sure that Christ hears them. And responds. Therefore, this is not limited to us only. Any person can talk with the Imam.

Ahmadinejad: I have never said such a thing.

Ahmadinejad: I – I – I was talking about peace.

Ahmadinejad: What is being said about an apocalyptic war and – global war, things of that nature - This is what the Zionists are claiming. Imam will come with logic, with culture, with science. He will come so that there is no more war. No more enmity, hatred. No more conflict. He will call on everyone to enter a brotherly love. Of course, he will return with Jesus Christ. The two will come back together. And working together, they would fill this world with love. The stories that have been disseminated around the world about extensive war, apocalyptic wars, so on and so forth, these are false.

Also noteworthy from Curry’s interview is that four times she asks Ahmadinejad to rule out any scenario by which Iran would develop nuclear weapons, and four times he pointedly refuses.