It’s been a long time coming.

For decades the United States of America has been edging away from its only real friend in the Middle East.

The relationship — which began tentatively at that brave moment when President Truman defied the ‘wise men” in his own administration and chose to recognize the newly born Jewish state; the relationship Israel worked tenaciously to strengthen in the ensuing years despite consistent opposition from within the State Department and other government circles; the relationship which since the Six Day War has become increasingly one-sided as America has chosen to cater to incessant Arab demands and press Israel into compliance — in the end it could no longer withstand the erosive onslaught it had weathered for so long.

The administration of President George W. Bush set the country apparently irreversibly on this path when it spawned the two-state vision and propelled Israel towards accepting the “Road Map for peace.”

But things came to a head at the United Nations this week in a tale of two speeches delivered in front of some 140 world leaders who had come together in New York for the 64th session of the General Assembly.

As they listened - joined by countless millions of others to whom the event was beamed around the world - these presidents and prime ministers, princes and kings witnessed the leader of the world’s most powerful nation contemptuously turn his back on one of the smallest.

And they heard the elected and oh-so-despised leader of that little nation - which has been around far, far longer than the United States and virtually every other nation with delegates in that room - spell out with dignity and conviction the justness of his people’s cause. 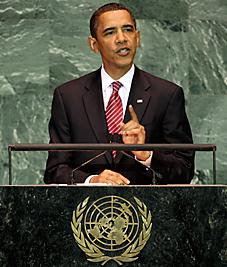 Betraying Israel with a kiss, Barack Obama expressed appreciation for the Jewish state, then denounced it as a nation of aggressive expansionists who were illegally occupying another people’s land.

America will not tolerate Israeli settlements, he stated emphatically. And Israel’s presence in Samaria and Judea is an “occupation” that has to end.

The situation between Israel and the Arabs was not the number one item in the American’s speech, which spelled out his vision for a new world order built on four “fundamental” pillars: Nuclear non-proliferation and disarmament, the pursuit of peace and security, the preservation of the planet and a global economy that advances opportunity for all.

Obama spoke for 38 minutes, of which less than five - well into the speech - were devoted to the Arab-Israel conflict. The transcript is 61 paragraphs long with just five speaking to this issue.

Yet there was no doubt that, to the president, the members of the General Assembly, and the press covering the event, this was the most important issue of all. Of the 12 ovations Obama received during the speech, fully half of them came in those few short minutes as he laid down his expectations.

That the United States:

This man’s idea of “just” is totally twisted.

According to him, Jewish settlement in the land of their forefathers is “illegitimate.”

The Jews’ presence in Samaria and Judea - the cradle wherein their nation was born, is an “occupation” that has to end.

But the Palestinian Arabs’ - who have never in history had a national home or identity; who forced its “cause” down the world’s throats by violence, terrorism murder and mayhem; who to this day vow to use any territory they get as a springboard from which to destroy the rest of Israel - these people’s demand for a national homeland to be established on those historical Jewish lands constitute “legitimate claims and rights!”

“Woe,” warns the God of Israel through the prophet Isaiah: “Woe to those who call evil good and good evil, who put darkness for light and light for darkness, who put bitter for sweet and sweet for bitter” (Isaiah 5:20).

“Woe,” warns the God of Israel through the prophet Ezekiel, to those who “strengthen the hands of the wicked, so that he does not turn from his wicked way to save his life.”

“I stand here today as the Prime Minister of Israel, the Jewish state” he said, eyes piercing the dignitaries as he looked around the room,

“I speak to you on behalf of my country and my people.”

Netanyahu strongly took issue with those who deny the Holocaust that killed two out of every three Jews in Europe a few short decades ago,

He reminded his audience - as if he needed to - of the burgeoning threat to destroy the State of Israel in a nuclear holocaust.

Recounting the disastrous outcome of Israel’s withdrawal from southern Lebanon (2000) and the Gaza Strip (2005), the Israeli insisted that his nation would not accept a withdrawal from the mountains of Samaria and Judea only to see a rocket-armed terrorist base set up overlooking the population centers in the coastal plain.

But if the Arabs truly want to make peace, the people of Israel will make peace with them. Those Arabs - or their representatives - left the hall; unable to even hear an Israeli leader speak directly to them.

As the session came to an end - having also provided an uninhibited platform for the anti-semitic tirades of Iran’s Ahmadinejad and Libya’s Ghadaffi - Israelis took stock of the realities now confronting them.

America - the nation they had long seen as a friend and ally - has effectively crossed the field to the other side - joining with all the other nations who refuse to recognize Israel’s claim to its biblical heartland, and who demand that Israel risk its very existence to appease the Arab world.

Time alone - and perhaps not much of it at all - will show whether there is any validity to what I will now say here:

That on September 23, 2009, in his globally-screened address to world leaders at the United Nations in New York, Barack Obama moved his country close to - perhaps even into, “the winepress of the Lord.”

Long ago the Almighty warned all those nations who come against Israel that the “Day” will come when He girds up His loins and in anger and fury will tread them out, in the winepress of His wrath.

“For the day of the LORD upon all the nations is near;
As you have done, it shall be done to you;
Your reprisal shall return upon your own head” (Obadiah 1:15).