Only a handful of cells.

I find this type of careless view of life troubling, especially since Mr. Sunstein's words now carry the weight of the White House. 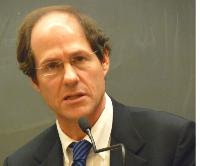 Let's examine more fully what Mr. Sunstein wrote in a 2002 review of the book "Our Posthuman Future" (which was published this week in WorldNetDaily):

"If scientists will be using and cloning embryos only at a very early stage when they are just a handful of cells (say, before they are four days old), there is no good reason for a ban (on cloning)."

"It is silly to think that 'potential' is enough for moral concern. Sperm cells have 'potential' and (not to put too fine a point on it) most people are not especially solicitous about them."

I'm very concerned with Mr. Sunstein's use of the word "potential" in reference to human embryos.

My friend Dr. David DeWitt, professor of Biology at Liberty University and director of the Center for Creation Studies, in reference to Mr. Sunstein's writing, said,

And it's a deadly game that may have far-reaching implications if unchecked. Dr. DeWitt added,

"What many fail to realize is that there is foundational truth – that man is created in the image of God."

That creation, of course, comes at the time of conception.

Mr. Sunstein's words come six months after a March White House ceremony in which President Obama signed an executive order allowing federal funding for research that will require the killing of human embryos.

At that time, Douglas Johnson of the National Right to Life Committee stated,

"Many researchers will not be satisfied to use only so-called surplus embryos. Many researchers are already demanding federal support for research in which human embryos would be created for the specific purpose of research, through human cloning and other methods, and there was nothing in the president's remarks today to limit NIH to the use of so-called surplus embryos created in IVF clinics."

I understand that these embryos do not look human or have properties that we typically recognize as bearing personhood. But if life begins at conception – and I believe that it does – we must be determined in protecting this life.

I love Psalm 139:13,14 because the passage illustrates the boundless love Christ has for each of us, even when we are in the womb. The verses read:

For You formed my inward parts;
You covered me in my mother's womb.
I will praise You, for I am fearfully and wonderfully made.
Marvelous are Your works,
And that my soul knows very well.

We see here our unique value to God. He ministers to us, even when we are vulnerable individuals within the womb.

This is a foundational truth. If we are to ignore these verses, we must disregard the entire Bible.

I see the ongoing effort to destroy human embryos as having a school-bully sort of quality. The embryos can't fight for or speak for themselves. They are small and seemingly insignificant.

As Christians, however, I believe we must always stand on the side of human life, speaking out for the ones that cannot speak for themselves and using foundational reasoning to challenge the "bullies."

On a similar note, I was so pleased this week to learn that the Christian Medical Association sent a letter to President Obama, notifying him that more than 10,000 health-care professionals and individuals have signed a petition calling for changes to be made to current health-care bills in Congress.

Those signing the Freedom2Care petition implored the president and lawmakers to protect "conscience rights" and cast out abortion legislation, specifically the Capps Amendment in the House bill and the Kennedy Amendment in the Senate bill, which signers say would require doctors to perform abortions or refer women to abortion providers.

As I've noted, it's not popular to take these types of positions. The mainstream sees us as naïve or holding outmoded values.

We must continue to stand against the flow of popular opinion, utilizing the foundational truths. May we not grow weary in well doing as we speak out for life, no matter who may oppose us.