In this edition of the Rapture Report we will look at the controversy surrounding the "Arctic Sea" and the Russian claim that no suspicious materials were found on the cargo ship. As we know from the recent news a Russian ship was "hijacked" and eventually found far away from the supposed hijacking site. The news media reported that the ship could have been carrying advanced S-300 defense missile systems headed for Iran. For those keeping up with the Iran and Israel situation we know that the S-300 Russian made defense systems would create a huge problem for an Israel air strike on Iran. Speculation swirled that the Israeli Mossad may have been behind the hijacking of the "Arctic Sea" ship as Russia had been informed by Israel that the ship may have been carrying arms headed for Iran. Naturally, any hint of the S-300s making their way to Iran would be of great concern for Israel and it is quite possible that the Mossad did in fact carry out an operation if S-300 defense systems were indeed on that ship. The Jerusalem Post reports:

The Arctic Sea was allegedly hijacked in the Baltic Sea in late July after leaving a Finnish port. Russian navy vessels intercepted the ship weeks later off Cape Verde, thousands of kilometers from the Algerian port where it was purportedly supposed to deliver a load of timber.

A Russian shipping expert and an EU anti-piracy official have speculated that the vessel was carrying a clandestine cargo, possibly S-300 surface-to-air missiles destined for Iran or Syria. 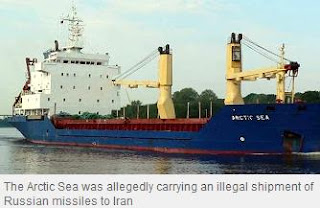 In today's news the Russian authorities have denied that there was any "suspicious" materials on the "Arctic Sea". This to me was an announcement that one would expect out of Russia. Russia would be foolish to admit that they were supplying Iran with these advanced missile defense systems after Israel has pleaded with Russia not to supply Iran with them.

Russian prosecutors found no suspicious materials on the ship Arctic Sea despite media reports it was carrying the advanced S-300 missile defense for Iran, Russian newswires reported on Saturday.

"The ship was searched with the help of modern appliances, inside and outside. There was nothing but timber and lumber. Nothing that could compromise Russian Federation was found," a spokesman for the Russian Prosecutor General's Investigative Committee said, according to an Interfax news agency report cited by Reuters.

At this point in time there is no concrete proof that the Israeli Mossad carried out a mission of this nature nor is there proof of S-300 missiles on board the "Arctic Sea," but when this information is added to the fact that Israel PM Benjamin Netanyahu made a "secret" visit to meet with Russia's Putin in Moscow things begin to get really interesting. We will need to keep an eye on Israeli and Russian relations in light of the future Ezekiel 38-39 prophecy and the fact that Israel could strike Iran at anytime. It appears to me that there are a lot of deadly games being played behind the scenes.

In other news it is being reported that US President Obama, Palestinian President Abbas, and Israeli PM Netanyahu will all meet on Tuesday on the sidelines of the UN General Assembly meeting in New York. The Israelis and Palestinians have been locked in a bitter squabble over demands before resuming so called "peace" talks. The Jerusalem Post reports:

White House press secretary Robert Gibbs said the three-way meeting would take place after Obama meets separately with each of the two leaders.

The announcement of the three-way meeting was a surprise considering US envoy George Mitchell’s failure to make progress while he was in the Middle East recently. The Jerusalem Post article went on to further report: 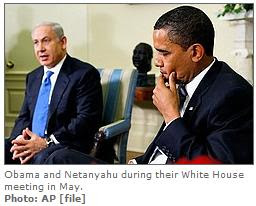 The announcement of the meeting came as something of a surprise, as earlier this week Mitchell failed to make progress in talks with the two leaders. Hours before the Saturday night's announcement, Israel and the PA continued to squabble over which side was to blame for the current stall in peace talks.

In Saturday's statement, Mitchell said "It is another sign of the president's deep commitment to comprehensive peace that he wants to personally engage at this juncture."

The meetings will take place in New York on the sidelines of the United Nations General Assembly meeting.

I would imagine that US President Obama is going to meet individually with each leader to pressure and scold them privately for failing to make progress on the Middle East peace process before holding the three-way meeting. I am expecting Israeli PM Netanyahu will receive the blunt of the pressure especially over the issue of continued construction in the West Bank which the international community hopes to make part of a future Palestinian state.

As for the Palestinians, I am not expecting Obama to do much or make any progress with Palestinian President Abbas as his hands are pretty much tied in making concessions to the Israelis. In the so called Middle East "peace" process, it is Israel that is expected to make all the concessions and the Palestinians to do all the receiving. It is my opinion that the peace talks will continue to fail and prove to be fruitless as both sides have made red lines in the sand that they will not cross. We'll have to wait and see what happens at the end of Tuesday but at this point I just do not expect much progress to be made in light of the current situation.

In the meantime, as we note with each Rapture Report that the window of opportunity continues to close with each passing day as it concerns the Iranian nuclear program. Iran for their part remains defiant and it appears that sanctions are having absolutely no effect on their position towards their nuclear program. It is my gut feeling that Iran's nuclear program is too far down the road for them to stop. This is considering that the IAEA has recently announced that Iran can now create a nuclear weapon and that they are currently working on the means to deliver this weapon. This news is disturbing and may indicate that the international community has waited too long to stop Iran. But somehow, I believe that it is possible that Israel will be forced to act militarily soon against Iran. They simply can't afford to wait much longer. In fact, one prominent ex-Israeli military official said this week that Israel needs to strike Iran before December. Only time will tell what happens, but let us remain sober and awake on what is going on.

In the meantime let us pray for Israel and especially Israeli PM Netanyahu as he makes his visit to the UN General Assembly where he will no doubt face incredible pressure to make a deal that will be bad for Israel. And as usual, let us keep watching for the blessed hope of the rapture of the church. As we see pieces moving around the prophetic chess board we will be wise to heed the Lord's words to "look up, your redemption is drawing nigh!"