The Compromise of Tolerance

I surrendered to the call of preaching the Gospel of my Lord Jesus on the last day of revival services in our home church, July 21, 1985. My "Daddy in the Ministry", Bro. Jamie Coleman, had preached a fiery message that Sunday and God's call was more than I could possibly resist. So, with a truly broken and contrite spirit, I fell at the foot of the cross that morning and cried out, "Okay, Lord. I'll do it!"

We had "dinner on the grounds" after church and after the meal, when almost everyone had left, Bro. Jamie called me and Sandy aside to pray over us and ask God's blessings on our ministry. In an empty sanctuary, in front of the pulpit, he had us kneel as he placed his hands on our heads. Then, with words from deep within his soul, he poured out his heart to God in an agonizing tone as he interceded in our behalf.

I wish I could remember all of what he prayed that day, but I can't. I remember the sincerity with which he prayed. I remember the solemnity of the moment. I remember the overwhelming presence of God and the feeling of the huge responsibility that I had just accepted. But I can only remember the closing words of Bro. Jamie's prayer. And I will never forget those words!

After crying out for God's greatest blessings to be upon our lives and ministry, this "Hellfire and brimstone" preacher said in a thundering voice,

"And Lord, if he ever compromises on Your Word... kill him!"

Needless to say, you don't soon forget a prayer like that!

Bro. Jamie was very serious in what he asked from God that day. As much he loved me, he would have rather had God call me home, than to allow me to compromise on the truth of God's Word in my preaching and teaching, and thereby hinder the Kingdom work. When it comes to our stand on what we KNOW the Bible teaches, there is no room for compromise! 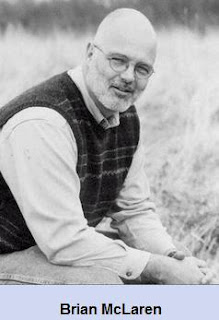 According to an Aug. 25 WorldNetDaily article by Joel Richardson1:

"This year, a group of emergent Christians led by one of the United States most influential pastors, Brian McLaren, has announced that it will actually be "observing" the Muslim holy month, along with a Muslim "partner." Ramadan is the month that Muslims thank Allah, their god, for revealing the Quran to Muhammad, their prophet. On McLaren's personal blog, he recently announced his intentions: 'We, as Christians, humbly seek to join Muslims in this observance of Ramadan as a God-honoring expression of peace, fellowship, and neighborliness.'2"

Let's be perfectly clear about something here...

Islam is a false religion that follows an unholy document (the Quran) in its worship of a false god! Allah, the Muslim god, is NOT just another name for the true God of this universe, as some would tell us. And their unholy writ, the Quran, is NOT just another rendering of "the truth" from God that is on equal footing with the Holy Bible! Islam is idolatry... plain and simple!

So why would anyone calling himself a Christian want to join Muslims in this observance of Ramadan, a month that is set aside to celebrate their false prophet's revelation of his false god's instructions to mankind? The answer is found in McLaren's own words. It is being done as an "expression of peace, fellowship, and neighborliness", which he calls "God-honoring". But since when is God honored by condoning, accepting, or participating in idolatry? Certainly, we are to reach out to all people with the love of Jesus. But we do NOT try to reach them by participating in their sinful ways!

When Paul said "I am made all things to all men, that I might by all means save some." (I Cor. 9:22), he did not imply compromise. But in order to more effectively communicate the Gospel of Jesus, the apostle was careful to be considerate of other's beliefs and traditions. He did not want to offend them and run them away before he could share the Gospel with them.

He said, "unto the Jews I became as a Jew, that I might gain the Jews; to them that are under the law, as [though I also was] under the law, that I might gain them that are under the law;" (I Cor. 9:20) But his acting in obedience to the law when he was around Jews who placed such a high importance on observing the law, was not sinful or idolatrous or showing approval of sinful ways. Indeed, if it were possible for us to live in perfect obedience to the law, we would all want to serve God so perfectly.

So, even though Paul knew he had been set free from the "bondage" of the law, he was not deceptive or hypocritical in his approach to those Jews who placed such a high importance on observance of the law. He just tried to be careful and considerate of their ways so that he might have the opportunity to tell them about a more perfect way through faith in Jesus Christ.

The essential part of Paul's actions was his motivation, which was to bring people to salvation in Christ. He was not doing it as simply an "expression of peace, fellowship, and neighborliness" like McLaren. Nor was he participating in sin in order to reach the sinner. But the liberal left in Christendom have a different motivation. They are all about "peace, fellowship, and neighborliness".

Over and over again, the expressed motive of this godless ecumenism is world peace and brotherly love (which sounds very good on the surface). And along with apostates like McLaren, the Roman Catholic Church is leading the way. Pope Benedict XVI, at the World Youth Day in Australia last July, "called on around 50 Christian leaders to fight for unity within the broader faith.

'...My dear friends, I have come to Australia as an ambassador of peace. For this reason I feel blessed to meet you who likewise share this yearning and the desire to help the world attain it.' The pope later met leaders from the Muslim, Jewish and other faiths, telling them religions had a special role in maintaining peace."3

For sure, desiring a peaceful existence (Heb. 12:14) and loving all people (Matt. 5:43-44) are Christian attributes. But in doing so, we are to NEVER compromise on our stand for the truth of God!

Because of His unyielding stand on the truth, our Lord Jesus said, "Think not that I am come to send peace on earth: I came not to send peace, but a sword." (Matt 10:34) And He went on to say that because of Him, people would even be at variance with members of their own family!

Love people with the love of Jesus? Yes! But disregard or participate in their sin in an effort to have peace and acceptance from them? Never! We don't even do it to "reach" them! Should we drink with the drunkard to reach him? Are we to gamble at the casino to reach its patrons? Are we to dabble in sexual immorality to be more accepted and at peace with the world? Of course not!

And neither do we legitimize idolatry in order to have peace with the idolaters. The Bible is perfectly clear on this:

"...for what fellowship hath righteousness with unrighteousness? and what communion hath light with darkness?... Wherefore come out from among them, and be ye separate, saith the Lord..." (2 Cor. 6:14b, 17a)

We are to be sanctified (set apart) from the sinful world. And it is through that holiness in us that the lost are drawn to Jesus.

Satan has so sugar-coated and disguised his poison with "peace and brotherly love" that people, even "Christians" are swallowing it in mega-doses. They don't understand their Bible well enough to even know better. As God said through the prophet Hosea, "My people are destroyed for lack of knowledge:" (Hos. 4:6a).

Today, the doctrine of "tolerance" has become the theology of the world, which should come as no surprise to us since... "Now the Spirit speaketh expressly, that in the latter times some shall depart from the faith, giving heed to seducing spirits, and doctrines of devils" (1 Tim. 4:1). And it is this devilish doctrine of "tolerance" that is melding all the religions of the world into one giant conglomerate that the False Prophet will eventually place at the feet of Antichrist. Each religion will be allowed to keep its own individual doctrine, but united by and subservient to the overall umbrella of "tolerance and brotherly love"... a one world religion that will eventually worship the Antichrist.

As for this preacher, there is no room for compromising on the truth of God's Word. As Paul said, "Woe is unto me, if I preach not the gospel!" (1 Cor 9:16) lest the closing request of Bro. Jamie's prayer be answered!