In the newly-released documentary film, Inside The Revolution — as well as in the National Town Hall Meeting on the threat of Radical Islam that we held on 9/11 — my colleagues and I have made the case that we are at the most dangerous moment in the Islamic revolution, that Radical Islamic jihadists are actively seeking to unleash horror inside the United States, and that we dare not lose sight of the threat.

“Federal agents have charged a 24-year-old Colorado resident, his father and another man with making false statements during an extensive terror investigation that stretches to Pakistan,” reports CNN. “The Justice Department said Sunday it is investigating several other people in connection with the plot to detonate bombs in the United States.”

“Najibullah Zazi and his father, Mohammed Wali Zazi — both originally from Afghanistan — were arrested Saturday night. They were handcuffed without incident after authorities raided Zazi’s home in the Denver suburb of Aurora. An acquaintance of the two men, Ahmad Wais Afzali, of Queens, New York, was also arrested. Afzali is a legal permanent resident from Afghanistan, as is Najibullah Zazi. Mohammed Wali Zazi is a naturalized U.S. citizen. ‘Each of the defendants has been charged by criminal complaint with knowingly and willfully making false statements to the FBI in a matter involving international and domestic terrorism,’ the Justice Department said in a statement.”

The arrests come after a startling report that Zazi admitted ties to al Qaeda. 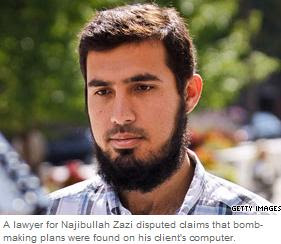 “A 24-year-old Colorado resident and Afghan national who is a suspect in an alleged terrorist plot in the United States has admitted to having ties to al Qaeda, an administration official familiar with the matter told CNN on Friday…. The alleged terrorist plot, which came to light this week after raids in New York, may have been targeting a major transportation center, such as a large railroad or subway station, sources close to the investigation told CNN on Thursday. There were plans for an attack, presumably in the New York area, where crowds are large and security screening for travelers who are not flying is lax, the sources said.” [New York Times coverage of the investigation to a possible al-Qaeda terror cell operating in Colorado and New York.]

The arrests of the Afghan nationals highlight the continued need for vigilance here at home. It also suggests we need to do more to fight and win the battle with al Qaeda and the Taliban in Afghanistan.

“The nation’s top military officer told Congress on Tuesday that the U.S. war in Afghanistan ‘probably needs more forces’ and sought to reassure lawmakers skeptical of sending additional troops that commanders were devising new tactics that would lead to victory over a resurgent Taliban,” reports the Washington Post. Adm. Mike Mullen, chairman of the Joint Chiefs of Staff, said that 2,000 to 4,000 additional military trainers from the United States and its NATO partners will be needed to ‘jump-start’ the expansion of Afghan security forces and strongly suggested that more U.S. combat troops will be required to provide security in the short term. ‘A properly resourced counterinsurgency probably needs more forces,’ Mullen said in testimony before the Senate Armed Services Committee.”