This past week President Barak Obama announced that the United States will abandon a planned missile defense shield in Eastern Europe. Last year the United States, Poland, and the Czech Republic reached an agreement to place 10 interceptor missiles with a range of up to 1,800 miles in Poland and a radar site in the Czech Republic. The stated purpose of the missile shield was to protect against attacks from rogue nations such as Iran. However Russia believes the missile shield's true purpose was to undermine its nuclear deterrent. Putin's government was strongly opposed to the plan and claimed the proposed shield was a "threat to its national security."

Obama's decision to scrap the missile shield has generated controversy and raised questions. Will abandoning the missile shield be interpreted by Russia as a gesture of goodwill or as a sign of weakness? How will the decision impact the United States' diplomatic relationship with Poland and the Czech Republic? What effect could this move have on negotiations with Iran?

It is undoubtedly no coincidence that, less than 24 hours after Obama pulled the plug, NATO proposed a new partnership with Russia. A new partnership that could include a joint Russian-NATO missile defense shield. 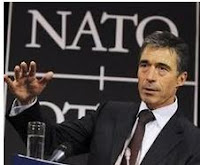 NATO's new Secretary-General Anders Fogh Rasmussen gave a speech on Friday in which he stated:

"We want to explore the possibility of linking NATO's missile defense shield with Russia's...I do believe that it is possible for NATO and Russia to make a new beginning and to enjoy a far more productive relationship in the future."

Some commentators are already heralding Rasmussen's words as the start of a new era in NATO-Russian relations. However there are still many hurdles to overcome.

The North Atlantic Treaty Organization (NATO) was formed in 1949 as a defensive alliance in which each member was pledged to come to the aid of any of its members which were attacked militarily. During the Cold War era NATO's primary role was to counter the Russian threat, and Russia still views its old adversary with suspicion. Russia has watched uneasily as NATO has continued to expand, welcoming new members, some formerly a part of the Soviet Union. Russia considers NATO's expansion to be "antagonistic." It has also warned potential new member nations such as Georgia and the Ukraine, in no uncertain terms, that joining NATO would have adverse consequences.

In recent years Russia has implemented an ambitious plan to update and expand its military. Russian defense spending has been rising steadily, with the help of high energy prices and oil revenues. As part of an 189 billion dollar weapons modernization program Russia plans to build five or six new aircraft carrier battle groups as well as at least four new submarines. Currently Russia has only one aircraft carrier. The new submarines will be armed with new Bulava SS-NX-30 missiles, a new intercontinental-range ballistic missile. It is the submarine based version of the Russian SS-27, which can carry up to six nuclear warheads. These two missiles are the foundation of the new Russian military, and will give it the ability to strike targets anywhere in the world.

Prophecy 20/20: Profiling the Future Through the Lens of Scripture - Dr. Chuck Missler (Book)