A Huge Gain for the RFID Microchip

And he causeth all, both small and great, rich and poor, free and bond, to receive a mark in their right hand, or in their foreheads

The mark of the beast. It's one of the most discussed topics in the realm of bible prophecy and yet none of us know exactly what it is going to consist of. Having said that, as most of my regular readers know, I have been keeping a very watchful eye on the FDA-approved implantable microchip (VeriChip) for some time now as a potential mark of the beast technology.

Imagine my surprise this morning when I read the following opening paragraphs of an article at SeekingAlpha.com entitled "VeriChip Takes Off on H1N1 Win":

An announcement today regarding the exclusive license granted to controversial chip-implant maker VeriChip (CHIP) for H1N1 detection sent CHIP shares hurtling nearly out of orbit - up 178%, or over $2 per share - to around $3.20 by Monday afternoon. Other news reports have cited that this is the biggest intra-day gain since the company went public in February 2007.

VeriChip's development partner, RECEPTORS LLC, has granted exclusive rights to VeriChip to develop one of its patents based on the "virus triage detection system" used to treat H1N1 virus, commonly known as "swine flu." The H1N1 virus sent shockwaves of worry about a dangerous pandemic developing world-wide, and just last week came FDA approval of the first treatments of the virus from Sanofi-Aventis SA (SFY), CSL Ltd, MedImmune (now a subsidiary of AstraZeneca (AZN) and Novartis AG (NOV).

VeriChip is best known for its human-implantable RFID (radio frequency identification) chip, which has sparked controversy from civil rights groups and religious organizations alike. Some opponents of the technology have derided VeriChip products as "spy chips."

A 178% gain in VeriChip stock in less than a single day on the heels of its potential value as a tool in combating what we're being told is a coming swine flu pandemic of epic proportions? The potential prophetic ramifications are huge!

Fear and Crisis as Vehicles of Change

Rahm Emmanuel, White House Chief of Staff, said the following a while back and it applies in the pandemic scenario:

You never want a serious crisis to go to waste. And what I mean by that is an opportunity to do things you think you could not do before.”

In the post-September 11 world, many people are afraid and the mainstream media with all its apocalyptic movies, television series, ample references to the Mayan calendar predicting the end of the world coming on December 21, 2012 and the arguably over-hyping of a global flu pandemic are only heightening humanity's collective fears, so much so that proponents of the new world order both can and presumably are doing things to bring us closer to that end than they ever could've before. 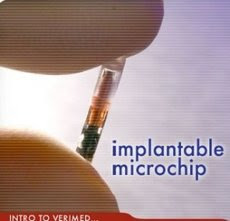 Bearing the above in mind, if the RFID implant is a gateway to the prophesied mark of the beast, what better way to enhance its image to mankind than market it as a life saver in a time of crisis? It would raise the RFID implant's marketability as the future mark of the beast by leaps and bounds, overcoming some of the issues that presently turn people off by it, like the ickiness of having a microchip injected into your flesh, for example.

Mere days I go I stumbled across an article on MSN Money about the RFID microchip implant that caught my eye. It was examining the benefits of mankind using microchip implants as a means to, literally, make financial transactions. Is that reminiscent of Revelation 13:16-17 or what? Just scroll to the top of the commentary if you're unsure.

The article, entitled "Pay with a wave of your hand?", stated, in part, the following:

It's a simple concept, really: You inject a miniature radio frequency identifier the size of a grain of rice between your thumb and forefinger and, with a wave of your hand, unlock doors, turn on lights, start your car or pay for your drinks at an ultrachic nightspot.

The problem is, the whole concept is a little geeky for most of us, nauseating for some, Orwellian for a few and even apocalyptic for a smattering of religious fundamentalists.

Forget the science of it - and yes, it does work remarkably well. Forget the convenience of it. Forget that similar identifying technologies, from bar codes to mag stripes, overcame similar obstacles and are now ubiquitous.

Radio frequency ID implants face a hurdle the others did not: ickiness.

"There is sort of an icky quality to implanting something," says Rome Jette, the vice president for smart cards at Versatile Card Technology, a Downers Grove, Ill., card manufacturer that ships 1.5 billion cards worldwide a year.

A lot of ground is covered in those few paragraphs, not to mention positive media coverage, that only heightens my suspicions that the RFID microchip implant may well be on its way to becoming the mark of the beast. Conclusions

Bible prophecy tells us that pestilences are going to play a prominent role in the end times (Luke 21:11), a device of some variety is going to eventually become both a necessity to make purchases and a symbol of allegiance to the prophesied Antichrist and the new world order he will utilize to wield control "over all kindreds, and tongues, and nations (Revelation 13:7), and that deception is going to be part and parcel for the last days on a variety of fronts.

In what I've shared with you in this commentary I believe we can all see that the news of our world today is quite possibly following the storyline detailed in bible prophecy that will lead to the mark of the beast becoming a reality and, in a wider sense, demonstrating that the fulfillment of all of the bible's yet to be fulfilled prophecies is within view. As such, let us live our lives soberly, righteously, and godly in this present world, looking for that blessed hope, and the glorious appearing of the great God and our Saviour Jesus Christ. (Titus 2:12-13)

If you're reading this commentary today and you have never accepted Jesus Christ as your Lord and Savior, it's time for you to do so. The world around us today is eerily reminiscent of the descriptions provided in bible prophecy of the days leading up to Christ's return to the extent that I wouldn't, personally, risk a second of my life at this point without having secured my eternal destiny.

In my youth, the pastor of my church used to say, "There is a heaven to gain and a hell to shun." So true, but in the days we're presently living in, as if the previous isn't enough to worry about, the potential that one may have to endure a time Jesus Christ said would feature tribulation the likes of which has never been seen from the creation until now (and beyond) has NEVER been higher than right now! Thus, the need to come to faith in Jesus Christ TODAY!

If the Rapture of the Church should occur today and you found yourself left behind for no other reason than you thought you had more time to come to faith in Christ than you actually did, what a tragedy it would be, especially if you realized that your soul's salvation depended on you understanding the content of my site's Post-Rapture Survival Guide and heeding its words of warning at the risk of being martyred when you could've been caught up in the air to be with the Lord and avoided the whole nightmarish situation!

Please, I'm begging you. Come to faith in Christ! Don't play games at a time like this. The risks are too great and none of us, even under the most ideal of circumstances, are promised a tomorrow.