Global Warming and Its Death Culture

The world's leaders are gathering for the United Nations climate summit in New York City. All the news media will be ga-ga reporting how the world is going to come to an end because of global warming. It wasn't too long ago, in the 1970s, that world leaders were saying that the world is coming to an end because of a new ice age. Now, with more sophisticated media and technology, the same political ilk is out there trying to convince the world that by killing babies through abortion, killing the elderly with euthanasia, banning the automobile, and putting a global tax on carbon emissions, will somehow magically control the rise of the temperature around the world.

It is an insult to the intelligence of mankind that paying more taxes to nebulous unproven government run carbon reduction initiatives and controlling the population would somehow change the weather. Even the guys that promote this unscientific drivel don't believe it. If they did, they would lead by example. The example that they portray in their actions indicate that the only concern they have for global warming is the money and control it will give them. Case in point is CBS News White House correspondent Mark Knoller's story on the carbon footprint left by leaders of this UN climate summit.

"To hear world leaders and others addressing the United Nations Summit on Climate Change, the threat could not be more real and the need more urgent to reduce emissions of greenhouse gases. But in stark contrast to the earnest statements is the carbon footprint associated with their gathering." 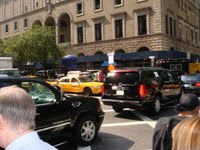 He writes that many of the leader's motorcades are 20-30 vehicles long, the lead car reaches the UN while the last car is still at the hotel they left. He says this also creates traffic jams. Not to mention the tens of thousands of gallons of jet fuel it takes to get to NYC for these eco-warriors and their entourages. And look at the way they live in their extravagant mansions and estates. Global warming sacrifices are only for the poor and the oppressed.

"Beware of false prophets, which come to you in sheep's clothing, but inwardly they are ravening wolves. Ye shall know them by their fruits."

One way to measure whether these people are sincere is to see how they propose to curtail climate change. Population control, keyword: abortion. Kill preborn babies and emissions will eventually be reduced. Al Gore and many others have proposed this. Secretary of State Hillary Clinton recently addressed climate change in India, saying that you can't talk about climate change "without talking about population and family planning." That's euthanasia and abortion. If it means death and killing, it is contrary to the fruits of life and living.