Did Obama Call on Israel to Vacate Temple Mount?

JERUSALEM – Did President Obama yesterday adopt U.N. and Palestinian phraseology while calling on Israel to give up the biblical West Bank and eastern sections of Jerusalem, including the Temple Mount?

Some members of the Israeli government here reacted angrily to Obama's strongly worded demand – expressed during his speech to the U.N. General Assembly – for the creation of a "viable, independent Palestinian state with contiguous territory that ends the occupation that began in 1967."

The Palestinians never maintained any official capacity in either territory, lands in which Jews have been present for thousands of years. The territories came under Jordanian rule from 1948 until Israel captured them in 1967 after Jordan's King Hussein ignored Israeli pleas for his country to stay out of the Six Day War. Most countries rejected Jordan's initial claim on the area, which it formally renounced in 1988. 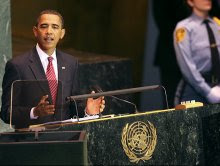 "Obama is misrepresenting Mideast history," she said. "The Jewish people's right to live in Judea and Samaria is firstly rooted in the Bible and God's promise 2,000 years before 1967."

"I really believe the whole 16-year process since the Oslo Accords (in which Israel gave up land in exchange for promises of peace) has proven the settlements are not the obstacle for peace. The main obstacle is the Palestinians' continued rejection of Israel as a Jewish state even within the borders of 1967."

"Obama cannot force this on Israel. We do not have a partner in Israel which is a viable partner."

"Every concession Prime Minister Netanyahu makes was not appreciated by the Palestinian Authority. The Jewish presence in Judea and Samaria is an asset for Israeli security. Instead of pressuring Israel, we would like to see the Obama administration deal with the real threat – the global threat coming from Iran."

The West Bank is considered landlocked territory not officially recognized as part of any country. Israel calls the land "disputed." The Palestinians and the U.N. Security Council claims the West Bank is "occupied" by Israel, which maintains overall control of most of the area while the Palestinian Authority has jurisdiction in about 40 percent. The U.N. Security Council is traditionally considered hostile to Israel.

The West Bank borders most of Israel's major cities, including Jerusalem and Tel Aviv. Military strategists long have estimated Israel must maintain most of the West Bank to defend its borders from any ground invasion.

Many villages in the West Bank, which Israelis commonly refer to as the "biblical heartland," are mentioned throughout the Torah.

The Book of Genesis says Abraham entered Israel at Shechem (Nablus) and received God's promise of land for his offspring. He later was buried in Hebron.

The nearby town of Beit El, anciently called Bethel meaning "house of God," is where Scripture says the patriarch Jacob slept on a stone pillow and dreamed of angels ascending and descending a stairway to heaven. In that dream, God spoke directly to Jacob and reaffirmed the promise of territory.

And in Exodus, the holy tabernacle rested in Shiloh, believed to be the first area the ancient Israelites settled after fleeing Egypt.

Obama's reference yesterday to "occupation that began in 1967" comes after a top PA official, speaking on condition his name be withheld, told WND earlier this week the Obama administration largely has adopted the positions of the PA to create a Palestinian state within two years based on the 1967 borders, meaning Israel would retreat from most of the West Bank and eastern sections of Jerusalem.

The official said Obama also accepted the PA position that Israeli-Palestinian negotiations begin where they left off under Prime Minister Ehud Olmert, who went further than previous Israeli leaders in his concessions to the Palestinians.

The official claimed the Obama administration will still support the announcement of a Palestinian state within two years.

"We understand from the U.S. that the Netanyahu government is not in a position to go against creating a state within two years," the official said.

The official claimed the Obama administration was ready to ultimately consider "sanctions" against Israel if the Netanyahu government rejected negotiations leading to a Palestinian state. The official refused to clarify which sanctions he was referring to or whether he was specifically told by the U.S. government it would consider sanctions.

The most anti-Israel president ever - Hot Air