Netanyahu Lays Down the Gauntlet

Over the years, I’ve heard Israeli Prime Minister Benjamin Netanyahu deliver a lot of speeches. But none so powerful as this.

It reminded me of President Bush’s speech to the U.N. in September 2002 when he challenged the world community to effectively hold Saddam Hussein accountable for dozens of violations of international law or risk irrelevance. 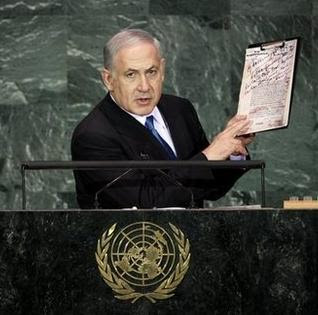 Today, Netanyahu challenged the world to stop Iran from acquiring weapons of genocide, or risk losing all moral legitimacy.

President Bush’s speech led to a war with Iraq. I suspect Prime Minister Netanyahu knows full well a war is likely coming with Iran. I pray that a peaceful solution can be found. But if Israel must go it alone — without the world’s help — Netanyahu wants to be on record for having clearly explained the issues and stakes.

In the meantime, some highlights: