One of the world's largest banks is bidding farewell to the U.S. dollar – just as the dollar faces intense scrutiny at today's G-20 summit and the United Nations announces it wants a new global reserve currency replacement.

"The whole picture of risk-reward for emerging market currencies has changed. It is not so much that they have risen to our standards, it is that we have fallen to theirs. It used to be that sovereign risk was mainly an emerging market issue but the events of the last year have shown that this is no longer the case. Look at the U.K. – debt is racing up to 100 percent of GDP," he said

China and rising Asia can no longer continue holding down their currencies to boost exports because it's hurting their own economies, creating asset bubbles, the Telegraph reported.

"The policy headache was already becoming clear in the final phase of the global credit boom but the financial crisis temporarily masked the effect," the report states. "The pressures will return with a vengeance as these countries roar back to life, leaving the U.S. and other laggards of the old world far behind."

Bloom told the newspaper that regional currencies will emerge as the anchor for HSBC's smaller trading partners, with China, Brazil, or South Africa filling the role of the U.S. Australia has been linking its fortunes to China through commodity ties.

The news comes on the heels of a recent Red Alert report that world organizations, including the United Nations, are openly calling for the creation of a one-world currency to replace the dollar – and the Obama administration's trillion-dollar deficits are serving as a trigger for the currency switch. 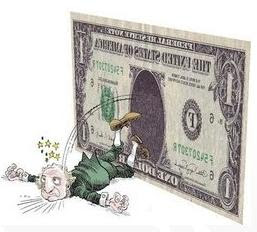 A United Nations report recommended that a new one-world currency should be created to replace the dollar as the standard for foreign-exchange holdings in international trade.

"If the plan succeeds, the United Nations would effectively end up replacing the United States as the issuer of the one-world international currency used as the standard of foreign exchange to settle international trade transactions," Red Alert reported. "The move would obviate the need for any nation state in the future to be the arbiter of world trade, marking yet another blow to national sovereignty on the path to one-world government."

The report, released by the United Nations Conference on Trade and Development, or UNCTAD, endorsed a proposal that Special Drawing Rights, or SDRs, issued by the International Monetary Fund, or IMF, "could be used to settle international payments."

The dollar is also expected to come under intense scrutiny at the today's G-20 Pittsburgh summit. China is leading calls for reconsideration of the dollar as a reserve currency. The country was first to call for a new global currency as an alternative to the dollar as the U.S. deficit began multiplying.

Red Alert has also reported that Russia and China championed the idea to use the IMF's Special Drawing Rights as a new international currency as a proposal that was adopted by the 2009 G-20 London summit held last April.

The G20 summit meeting took a step toward creating a new one-world currency through the International Monetary Fund that is designed to replace the dollar as the world's foreign exchange reserve currency of choice.

Point 19 of the final communiqué from the G20 summit in London on April 2 stated, "We have agreed to support a general SDR which will inject $250 billion into the world economy and increase global liquidity," taking the first steps forward to implement China's proposal that Special Drawing Rights at the International Monetary Fund should be created as a foreign-exchange currency to replace the dollar.

The IMF created SDRs in 1969 to support the Bretton Woods fixed exchange-rate system.

"The international supply of two key reserve assets – gold and the U.S. dollar – proved inadequate for supporting the expansion of world trade and financial development that was taking place," a document on the IMF website explains. "Therefore, the international community decided to create a new international reserve asset under the auspices of the IMF."

Until the current global economic crisis, SDRs issued by the IMF have been used by IMF member nation states primarily as a reserve account to support international trade transactions, not as an alternative international currency available to settle international debt transactions in danger of default.

Some say the discussion of using SDRs at the IMF as an international reserve payment system is further evidence that the momentum to create a one-world currency is gaining not only among academic economists, but also among professional economists holding prominent government positions.

Red Alert previously reported that strong support for the idea of a one-world currency has recently come from Canadian economist Robert Mundell, who won a Nobel-prize in 1999, for his work formulating the intellectual basis for creating the euro.

Mundell endorsed the idea of Kazakhstan President Nursultan Nazarbayev to create the "acmetal" as a world currency, according to the Australian News.

Craig Smith, president and CEO of Swiss America Trading Corporation, a national investment firm specializing in U.S. gold and silver coins, has been warning about the decline of the dollar for many years.

"It is now happening before our eyes," Smith said. "The dollar is getting ready to get hammered, and there is no way for the Fed to stop it."

Smith, author of "Rediscovering Gold in the 21st Century," has argued that the simplest solution for Americans looking to protect their wealth is to convert it from unstable dollars into gold, "the most stable currency in the world."

The Late Great USA: NAFTA, the North American Union, and the Threat of a Coming Merger with Mexico and Canada - Jerome R Corsi (Book)