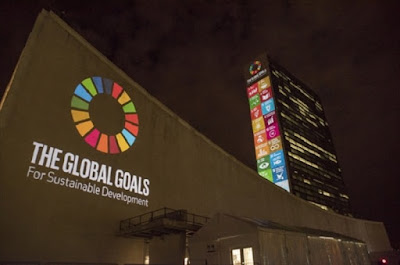 (THE NEW AMERICAN)—The United Nations and its mostly autocratic member regimes have big plans for your life, your children, your country, and your world. And those plans are not limited to the coercive "climate" agreement recently concluded in Paris.

While the establishment media in the United States was hyping ISIS, football, and of course "global warming," virtually every national government/dictatorship on the planet met at the 70th annual General Assembly at UN headquarters in New York to adopt a draconian 15-year master plan for the planet. Top globalists such as former NATO chief Javier Solana, a socialist, are celebrating the plan, which the summit unanimously "approved," as the next "Great Leap Forward"—yes, the old campaign slogan of the Chinese Communist Party.

The master plan is comprised of 17 "Post-2015 Sustainable Development Goals" (SDGs) with 169 specific "targets" to be foisted on all of humanity—literally all of it, as the plan itself states explicitly. "As we embark on this collective journey, we pledge that no one will be left behind," reads the UN manifesto, entitled Transforming Our World: the 2030 Agenda for Sustainable Development. But if you love liberty, self-government, free markets, or the U.S. Constitution, you will almost certainly be wishing that the UN would leave you behind.

Officially dubbed "Agenda 2030," the UN plot, as its full title suggests, is aimed at "transforming" the world. The program is a follow-up to the last 15-year UN plan, the defunct "Millennium Development Goals," or MDGs. It also dovetails nicely with the deeply controversial UN Agenda 21, even including much of the same rhetoric and agenda. But the combined Agenda 2030 goals for achieving what is euphemistically called "sustainable development" represent previous UN plans on steroids—deeper, more radical, more draconian, and more expensive.

"This Agenda is a plan of action for people, planet and prosperity," reads the preamble. "All countries and all stakeholders, acting in collaborative partnership, will implement this plan." Ironically, the preamble even claims the UN goals will "free the human race from the tyranny of poverty" and "heal" the planet—or, as the planet is also referred to in the document, "Mother Earth." Not-so-subtly purporting to usurp the role of God, the UN even claimed that the "future of humanity and of our planet lies in our hands."...

The Obama administration, which apparently does not plan to present the UN scheme to the U.S. Senate for ratification as required by the U.S. Constitution, also offered a forceful defense of the UN agenda. Speaking to the UN General Assembly on September 27, 2015, after purporting to commit the United States to the global plot, Obama claimed the UN blueprint "is one of the smartest investments we can make in our own future."

Even the world's leading religious figure, Pope Francis, addressed UN member governments with a plea to support the UN goals. "The adoption of the 2030 Agenda for Sustainable Development...is an important sign of hope," he declared, before demanding a UN "climate" regime as well....

For now, at least, the world and the White House are all pretending that the SDGs are binding on Americans, too. However, the U.S. Senate was not consulted, as the Constitution requires for all treaties. And even if the Senate were to ratify it, the federal government cannot grant itself new anti-constitutional powers merely by approving a treaty. Therefore, the agreement has no force in the United States. But as UN Agenda 21 showed clearly, that does not mean that the Obama administration, and possibly future presidents, would not attempt to push it forward anyway. The American people, therefore, must demand through their elected representatives that the UN power grab be stopped.