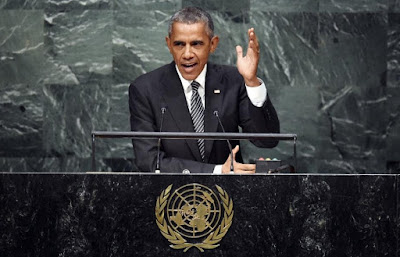 (BIN)—Al–Jarida, an Arabic language Kuwaiti magazine, published an article on Friday claiming that US President Barack Obama has set his sights on becoming the next Secretary General of the United Nations when he leaves the Oval Office in one year. If true, and if he succeeds in this endeavor, Obama would be replacing the present Secretary General, South Korean Ban Ki-Moon, who is serving his second five-year term in the position. Moon's term as Secretary General is set to end December 31, 2016, coincidentally 21 days before Obama's second term as President ends. Al-Jarida attributed the rumor to "informed sources".

The article also claimed that upon hearing of President Obama's plans, Israel's Prime Minister, Benjamin Netanyahu "vowed to counter his campaign". They quoted Netanyahu as saying, "Eight years of Obama's judgments and marginalizing Israel was not enough? Now he wants to be in a position to cause us trouble in the international forum?"...