In latest diplomatic move against Israel, and as Arab terror attacks continue to target Jews, PA to ask UN to deploy troops in Jerusalem. 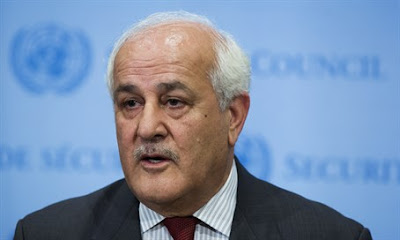 The proposal would be included in a draft resolution aimed at defusing weeks of violence, largely consisting of a series of brutal Arab-on-Jew terrorist attacks, which many fear could still spiral further out of control.

Palestinian envoy Riyad Mansour told reporters that the situation was "very explosive" and that the Security Council must find ways of "providing protection" to the Palestinians.

"The situation warrants providing protection for our people in the occupied territory starting in the Old City of Jerusalem and Al-Aqsa mosque," Mansour told reporters.

Arab ambassadors are due to meet at the United Nations on Thursday to discuss calls for an emergency Security Council meeting to discuss the worsening violence.

Mansour said the Arab countries were weighing a possible draft resolution that demands a withdrawal of Israeli security forces from flashpoint areas and calls for the deployment of the protection force at "Al-Aqsa," referring to the entire Temple Mount, which is Judaism's holiest site but in recent decades has been claimed by Palestinian Arabs.

"We believe that some form of observers or international force (should) be placed there in order to guarantee that the status quo will be continued and to protect the Palestinian worshippers," said Mansour....