How Obama Ushered in the New Age of Christian Martyrdom 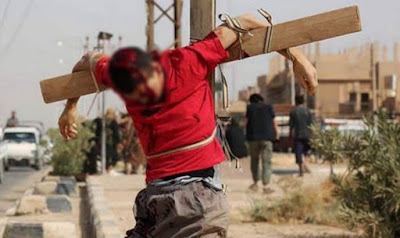 (GATESTONE INSTITUTE)—Everywhere that U.S. leadership helped Islamic jihadis topple secular autocrats in the name of "democracy and freedom," indigenous Christian minorities are forced either to convert to Islam or die.

Many are accepting death.

Most recently, on August 28 near Aleppo, the Islamic State (IS or ISIS) tortured, mutilated, publicly raped, beheaded and crucified 12 Christians for saying they "would never renounce Christ" for Muhammad.

The jihadis took one group in front of a large crowd. They cut off the fingertips of a 12-year-old boy, who steadfastly refused to submit to Islam. They "severely beat him, telling his father they would stop the torture only if he, the father, returned to Islam." He refused, so they "also tortured and beat him and the two other ministry workers. The three men and the boy then met their deaths in crucifixion."

According to a Christian leader associated with the martyrs, "They were left on their crosses for two days. No one was allowed to remove them." A sign saying "INFIDELS" was placed next to their crosses.

The other eight Christians, including two women, aged 29 and 33, were also ordered to renounce Christ and embrace Islam before a large crowd. When they refused,

"The Islamic extremists then publicly raped the women, who continued to pray during the ordeal, leading the ISIS militants to beat them all the more furiously.

"As the two women and the six men knelt before they were beheaded, they were all praying.

"After they were beheaded, their bodies were hung on crosses, the ministry director said."

The same is happening in the two other Arab nations where the U.S., under the pretext of "freedom and democracy," overthrew the secular dictators who had long kept a lid on the jihadis: Libya and Iraq.

Late last year, Andrew White, an Anglican priest known as the "Vicar of Baghdad," recounted the horrific atrocities against Christians in Iraq—including seeing their children chopped in half for refusing to embrace Islam:

"ISIS turned up and they said to the [Christian] children, 'You say the words [shehada, convert to Islam], that you will follow Muhammad.' And the children, all under 15, four of them, they said, 'No, we love Jesus [Yesua]. We have always loved Jesus. We have always followed Jesus. Jesus has always been with us." They [ISIS] said, 'Say the words!' They [children] said, 'No, we can't.' [White starts sobbing] They chopped all their heads off. How do you respond to that? You just cry. They are my children. That is what we have been going through. That is what we are going through."