We began scrutinizing New Testament texts that "kingdom now" theologians employ in an attempt to argue that the kingdom is a present reality to show that none of these passages teach a present, spiritual form of the kingdom. We have examined the typical texts from both the Gospels and Acts used by "kingdom now" theologians. We now briefly turn our attention to the Pauline Epistles. 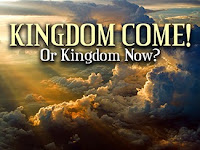 The Kingdom in Thessalonians and Corinthians

Kingdom now theologians employ 1 Thessalonians 2:12: "So that you would walk in a manner worthy of the God who calls you into His own kingdom and glory." This verse, in actuality, teaches a future manifestation of the kingdom rather than a present one. E.R. Craven focuses on the last word "glory" in interpreting the earlier word "kingdom." He explains, "The preposition in the Greek is eis. But since believers on earth are not yet in glory, the whole expression is manifestly proleptical, and the E. V. gives the translation, unto." [1]

Another verse employed by kingdom now theologians is 1 Corinthians 4:20: "For the kingdom of God does not consist in words but in power." However, the context argues for a futuristic understanding of the word "kingdom" here. Toussaint observes, "There is no verb in the Greek text, so it must be supplied. That Paul is anticipating the future is seen in verse five and eight of the same chapter." [2] McClain adds, "To interpret 1 Corinthians 4:20 as a present kingdom of the saints would make Paul contradict what he had already written in verses five and eight." [3] Furthermore, the word "power" (dynamis) in verse 20 is used in a futuristic sense in Hebrews 6:5, which says, "and have tasted the good word of God and the powers of the age to come." McClain observes, "The same Greek term is used to describe the great public miracles which, according to Hebrews 6:5, belong to 'the age to come, i.e.,' the Kingdom age." [4] Also, all the other references to "kingdom" are futuristic in this letter (1 Cor. 6:9-10; 15:24, 50). Thus, the idea here is that knowledge of the future influences one's behavior in the present (2 Pet. 3:11). Thus, "Paul's ministry could demonstrate the authority of that future kingdom." [5]

Kingdom now theologians also employ 1 Corinthians 15:24, which says, "then comes the end, when He hands over the kingdom to the God and Father, when He has abolished all rule and all authority and power." However, because the context of the passage pertains to the future resurrection and "the end," the kingdom's establishment must transpire in the distant future. McClain explains:

For the Kingdom of God Is Not Eating and Drinking

Romans 14:17 says, "for the kingdom of God is not eating and drinking, but righteousness and peace and joy in the Holy Spirit." Kingdom now theologians frequently use this verse to speak of the present and spiritual reality of the kingdom. Historic premillennialist George Ladd writes,

The Word of God does say that the Kingdom of God is a present spiritual reality. "For the kingdom of God is not eating and drinking but righteousness and peace and joy in the Holy Spirit" (Rom. 14:17). Righteousness and peace and joy are fruits of the Spirit which God bestows now upon those who yield their lives to the rule of the Spirit. They have to do with the deepest springs of the spiritual life, and this, says the inspired apostle, is the Kingdom of God...The Kingdom is a present reality...It is an inner spiritual redemptive blessing (Rom. 14:17) which can be experienced only by way of the new birth... [7]

Some kingdom now theologians go even further than Ladd and use this text to convey the idea that we should not be looking for a coming kingdom with physical characteristics such as eating and drinking. Rather, the kingdom is entirely spiritual and a present reality. However, Romans 14:17 does not deny an earthly kingdom. The kingdom will very clearly be a time of banqueting and feasting. Jesus said in Matthew 8:11 of the kingdom: "I say to you that many will come from east and west, and recline at the table with Abraham, Isaac and Jacob in the kingdom of heaven." In fact, Romans 14:17 simply says that believers should not emphasize the physical aspect of the kingdom at the exclusion of its spiritual components.

Promoting emphasis rather than exclusion is a common way of communicating in Scripture. Toussaint explains, "It was common for the Jews to say 'not...but' and simply mean that the emphasis is not this but that." [8] For example, when Hosea 6:6 says, "For I desire mercy and not sacrifice," the prophet was not calling for sacrifices to cease in order to pursue mercy. Hosea is simply saying sacrifices should not be emphasized at the expense of mercy. Similarly, the exhortation regarding not laying up treasure (Matt. 6:19-20) does not mean that Christians should not have bank accounts. Rather, it is a question of emphasis. Instead of emphasizing money, believers should emphasize spiritual priorities. Just so, the exhortation regarding jewelry (1 Pet. 3:3-4) does not mean that women should never wear jewelry. Rather it is a question of emphasis. Instead of emphasizing outward beauty, women should emphasize inward beauty (1 Pet. 3:6; Prov. 31:30). In addition, in the previously discussed verse, 1 Corinthians 4:20 ("For the kingdom of God does not consist in words but in power"), it does not say that words or speech will be absent from the kingdom. Speech will obviously be present in the kingdom as Zechariah 8:23 predicts, "In those days ten men from all the nations will grasp the garment of a Jew, saying, 'Let us go with you, for we have heard that God is with you.'" His words are a matter of emphasis. In other words, instead of excluding speech, the kingdom will also be emphasized by power in addition to speech. When understood in this light, Romans 14:17 does not deny or exclude the physical component in the coming kingdom. Instead, the verse simply highlights or emphasizes the fact that the coming kingdom will emphasize a spiritual component as well. [9] In other words, "in that coming kingdom the emphasis will not be on food but on spiritual realities." [10]

Furthermore, although "is" (estin) is in the present tense in Romans 14:17, this verse is not communicating that the kingdom is a present reality. It is possible to interpret Romans 14:17 along the lines of a dejure (legal), defacto (factual) distinction. While believers are legally heirs of God’s coming kingdom, the kingdom is not yet a factual reality upon the earth. We find the same dejure/defacto distinction in Paul's other letters. For example, in Philippians, believers are called citizens of heaven (Philip. 3:20). In Ephesians, believers are said to be seated with Christ in the heavenly places (Eph. 2:6). This heavenly position represents the legal standing of the believer. Yet believers are not factually in heaven now. This same dejure/defacto distinction is likely present in Romans 14:17 regarding the kingdom. Thus, all Romans 14:17 teaches is that believers are citizens of the earthly kingdom to come rather than present, factual residents in the earthly, Davidic kingdom yet to come.

This future kingdom idea seems to be in view in this passage since the context deals with the future judgment of rewards for the believer (Rom. 14:10-12). This futuristic understanding of the kingdom in this verse does not mean that the concept is inapplicable in the present since knowledge of the future always affects one's behavior in the present. Second Peter 3:11 says, "Since all these things are to be destroyed in this way, what sort of people ought you to be in holy conduct and godliness." Toussaint notes, "In that coming kingdom the emphasis will not be on food but on spiritual realities. If that will be true in the future, the Christian's present conduct should reflect it. The future does influence the present (cf. 2 Peter 3:11)." [11] McClain further explains how this futuristic interpretation of Romans 14:17 still allows a present application to the church:

The thought here fits a future Kingdom better than a present one. For surely in the present life no one can deny the importance of meat and drink; but so far as the Church is concerned in the future kingdom these things will be of no consequence. Therefore since the church is to reign in the Kingdom, its members should not judge or grieve one another in such matters here and now (cf. vss. 13-21). All disputes of this nature should be left for the 'judgment seat of Christ,' which will inaugurate His Kingdom upon the earth (vs. 10). [12]

[3] Alva J. McClain, The Greatness of the Kingdom; an Inductive Study of the Kingdom of God as Set Forth in the Scriptures (Grand Rapids: Zondervan, 1959), 435.