We began scrutinizing New Testament texts that "kingdom now" theologians employ in their attempt to argue that the kingdom is a present reality to show that none of these passages, when rightly understood, teach a present, spiritual form of the kingdom. We began to scrutinize the typical texts from the Book of Acts used by "kingdom now" theologians. 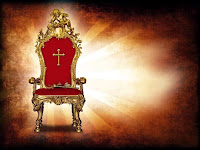 Perhaps the primary reason advanced by "kingdom now" theologians in their attempt to equate God's present work in the church with the present, spiritual manifestation of the Messianic kingdom is that following His Ascension Christ supposedly took His seat on David's Throne in heaven. From this regal position He now orchestrates the spiritual Messianic kingdom through the church. However, it is far better to reject the notion that the Davidic Kingdom is present in any sense today and instead to maintain that the Davidic Kingdom will not be inaugurated until the millennial age. At least six reasons exist in support of this conclusion.

First, we noted that the Old Testament consistently depicts the Davidic Throne in terrestrial rather than celestial terms. Second, we noted that because of this scriptural portrayal of the Davidic Throne, to argue that the Davidic Throne is now manifesting itself in this age from heaven is to place under unnatural duress the notions of progress of revelation and literal or normal, grammatical, historical hermeneutics. Third, as we began explaining in the last issue, no New Testament verse or passage clearly puts Christ on David's Throne in the present age.

Peter's use of Psalm 110:1 in Acts 2:34-35 is often used to justify Christ's present Davidic enthronement. Yet of Psalm 110, Johnson observes that the Messiah's present position as depicted in this Psalm fails to include imagery of coronation. Only Christ's priestly activity is mentioned. Such coronation imagery would certainly have been mentioned if in fact the Psalm were intended to describe Christ's enthronement as Davidic King. Notice the word "until" in Psalm 110:1: "The LORD says to my Lord: 'Sit at My right hand Until I make Your enemies a footstool for Your feet'" (italics added). Based upon the psalmist's use of this word "until," Johnson observes that in Psalm 110 the Messiah is awaiting a future conquest while He currently resides at the Father's right hand. [1]

In an attempt to argue that Christ is now ruling from David's Throne, "kingdom now" theologians of all varieties also typically connect the prediction that the Messiah would one day sit on David's Throne in Psalm 132:11 (Acts 2:30) with Christ now seated in His present session in Psalm 110:1 (Acts 2:33-35). Yet, Craven notes the invalidity of this parallel:

It is assumed by many that the exaltation of ver. 33 constitutes the session on the throne of David of ver. 30. But the assumption is wholly gratuitous. Nowhere in his sermon did the apostle declare the oneness of the two events; and most certainly the exaltation there spoken of does not imply the session as already existing—it may be an exaltation begun, to culminate in a visible occupancy of the throne of David. (The visible establishment by an emperor of the seat of his government in the heart of a once revolted province, does not derogate from his dignity—does not imply an abdication of government in the rest of his empire.) But beyond this, not only is the assumption gratuitous; it is against probabilities that amount to certainty. The apostle, be it remembered, was arguing with Jews, to prove that the absent Jesus was the Messiah (ver. 36); he was arguing with those, one of whose most cherished beliefs it was that the Messiah should occupy a visible throne. To suppose that, under such circumstances, he should advance a doctrine at war with this belief without a word of explanation or proof, and that too in a sentence capable of an interpretation consistent therewith, is inconceivable. The interpretation suggested by the writer is confirmed not only by its consistency with the previous teachings of our Lord, but by the address delivered by the Apostle Peter shortly after, Acts 3:19, 20. The literal translation of the passage referred to is as follows...: "Repent ye, therefore, and be converted, that your sins may be blotted out, in order that the times of refreshing may come from the presence of the Lord, and that He may send the Messiah Jesus, who was appointed unto you, whom the heavens must receive until the times of the restitution of all things," etc. It is also confirmed by the subsequent teachings of the apostle in his epistles; comp. 1 Peter 1:4–7, 13; 2 Peter 1:11, 16; the kleronomia and apokalypsis of the I Epistle are manifestly synonymous with the basileia and parousia of the II. [2]

Craven raises several important points. Peter's sermon never unambiguously or overtly declares that the present session of Christ (Acts 2:33-35) is the same as His Davidic reign (Acts 2:30). Acts 2:30 simply describes Christ as the Davidic heir or a Davidite who will one day inherit and occupy David's Throne in Jerusalem, just as He is now seated on His Father's throne in heaven (Rev. 3:21). John 1:29 ("Behold, the Lamb of God who takes away the sin of the world!") is similar by denoting what Christ will accomplish as sin bearer in present tense terms before He actually spilled His blood. When John the Baptist uttered the words, it was a done deal from the divine side regarding what Jesus would do as sin bearer before He became in fact and in time the sin bearer. Similarly, it was a done deal that David would reign for the soon to be deposed Saul as early as his anointing in 1 Samuel 16 although David did not actually reign from David's Throne in Jerusalem until much later (2 Sam. 2; 5). Thus, all that Acts 2:30 really conveys is that it is already a foregone conclusion that Jesus will reign from David's Throne one day although His Davidic rule from earthly Jerusalem has not begun. Craven also points out that had it been Peter's intention in Acts 2 to convert the terrestrial Davidic Throne into a celestial reality, this would have certainly required a far more in-depth explanation beyond what is actually furnished in Peter's sermon, given Peter's Jewish audience that still understood the Davidic Covenant in terrestrial terms.

Craven also points out that Peter's message of a future Davidic enthronement of Christ is consistent with what Peter conveys in his two epistles as well as his message given in the very next chapter (Acts 3:19-21). However, kingdom now theologians sometimes use these verses (Acts 3:19-21) in an attempt to argue that the Davidic Kingdom is a present reality. For example, Progressive Dispensationalists interpret the "times of refreshing" in verse 19 to refer to the "already" stage of the kingdom and the "restoration of all things" in verse 21 to refer to the "not yet" stage of the kingdom. [3] However, because the two clauses follow hopos, are connected by kai, and both contain subjunctive verbs, nothing grammatically separates the two clauses. Thus, they are speaking of the same event rather than two unrelated events. [4] Viewing both clauses as referring to the same event is strengthened upon recognizing that the plural kairoi (times) in verse 19 is parallel to the plural chronon (seasons or times) in verse 21. [5]

...the word Kingdom does not occur in Acts 2...It is difficult to explain why Luke does not use the term if the kingdom is being inaugurated. He employs it forty-five times in the gospel and uses it two more times in Acts 1...one would expect Luke to use the word if such a startling thing as the inauguration of the kingdom had taken place. The fact that Luke uses kingdom only eight times in Acts after such heavy usage in his gospel implies that the kingdom had not begun but was in fact, postponed. [6]

Moreover, Ryrie asks, "If Christ inaugurated His Davidic reign at His ascension, does it not seem incongruous that His first act as reigning Davidic king was the sending of the Holy Spirit (Acts 2:33), something not included in the promises of the Davidic Covenant?" [7]

Far from teaching that the Davidic enthronement of Christ has begun, in actuality the New Testament teaches that Christ's present position is in expectation of His future Davidic reign. Hebrews 10:12-13 says, "but He, having offered one sacrifice for sins for all time, sat down at the right hand of God, waiting from that time onward until His enemies be made a footstool for His feet." Of this passage Newell writes, "Our Lord is not now on His own throne, the throne of David. He is at the Father's right hand, on the Father's throne, and is now the Great High Priest, leading the worship of His saints; and also our Advocate against the enemy. But He is there in an expectant attitude..." [8]

[3] Darrell Bock, "The Reign of the Lord Christ," in Dispensationalism, Israel, and the Church, ed. Craig Blaising and Darrell Bock (Grand Rapids: Zondervan, 1992), 55-61; idem , Jesus According to Scripture: Restoring the Portrait from the Gospels (Grand Rapids: Baker, 2002), 580.