Israel to Miss Out on 'Blood Moon' Phenomenon

The scheduled appearance of four total lunar eclipses on major Jewish holidays between this Monday night (the start of Passover 2014) and September 27, 2015 (the start of Sukkot) has the attention of much of the Christian world. But the eclipses are going to go almost totally unseen in Israel.

Data published by NASA reveals that all but the last of the four eclipses will not be visible from the Middle East, and even the fourth will only be partially visible. 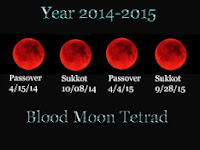 Total lunar eclipses—what are often referred to as "blood moons"—are not uncommon, 13 of them having occurred since 2000. And, since both Passover and Sukkot are scheduled on the full moon, both have occasionally coincided with blood moons, the last time being the start of Sukkot in 1996.

Seven times in the past 2000 years, a tetrad has coincided perfectly with Passover and Sukkot. One of those tetrads began just prior to the outbreak of the Six Day War in 1967. Two others (in 1493 and 1949) began more than a year after the expulsion of the Jews from Spain and the State of Israel's declaration of independence, respectively. The other four occurred during times of no particular significance to the Jewish people.