The Significance of Luke 19:41-44 for the Kingdom and Israel

"If you had known in this day, even you, the things which make for peace! But now they have been hidden from your eyes" (Luke 19:42).

While often overlooked in discussions of the kingdom, Luke 19:41-44 is strategic for understanding the kingdom program. This teaches that kingdom blessings were presented to Israel, but national calamity would now occur because of unbelief. Verse 41 states:

"When He approached Jerusalem, He saw the city and wept over it."

As Jesus came eastward from the Mount of Olives for the short remainder of the travel to Jerusalem His emotions were not that of joy. Verses 42-44 tell why:

"If you had known in this day, even you, the things which make for peace! But now they have been hidden from your eyes. For the days will come upon you when your enemies will throw up a barricade against you, and surround you and hem you in on every side, and they will level you to the ground and your children within you, and they will not leave in you one stone upon another, because you did not recognize the time of your visitation."

The reason for this emotional display was Jesus' sorrow for Israel. He wept for Israel like a parent weeping for a lost or wayward child. Israel's rejection of her caring Messiah will result in terrible consequences even though they were blind to these coming results. 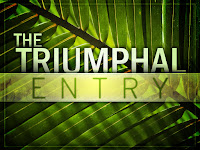 Jesus points out that there was something significant about "this day." "If you had known in this day, even you, the things which make for peace" (v. 42).

The reference to "this day" is emphatic and reveals that there is something about this particular day that makes Jesus sorrowful. But why? The reason is that "this day" had the potential to bring "things which make for peace." Israel's Messiah on this day could bring the kingdom and its blessings. This "peace" must be more than just individual salvation. Jesus addressed Jerusalem, the capital city of Israel like a person—"You." "If you had known ..." By addressing Jerusalem, Jesus is addressing Israel as a nation.

Peace could have come to Israel on this day but such will not be the case. Instead, peace will be "hidden" from them and judgment will come. He tells them that enemies will surround Jerusalem and utterly destroy the city. The people including the children will be destroyed and no stone would be left intact. The reason for this is—"because you did not recognize the time of your visitation." Israel's visitation was the appearance of her Messiah who proclaimed the nearness of the kingdom (see Matt 4:17).

Some scholars have postulated "this day" and this "visitation" is the fulfillment of the Daniel 9:25 prophecy, that Messiah the Prince would come to Israel at the end of the sixty-ninth week of Daniel. Harold Hoehner claims that the sixty-ninth week of Daniel expired exactly on the day of the Triumphal Entry of Jesus into Jerusalem. [1] If this is the case "this day" has prophetic significance going back to Daniel 9.

So what does this passage have to do with the kingdom of God? Previously Jesus revealed that the kingdom of God would not be established immediately (Luke 19:11-27). Now we are told there could have been "peace." Peace here refers to the kingdom blessings promised in the Old Testament. Of course, spiritual salvation would be at the heart of this peace, but this peace would include security and prosperity. Under inspiration by the Holy Spirit, Zacharias prophesied that Jesus would bring "redemption for His people" and "Salvation FROM OUR ENEMIES, AND FROM THE HAND OF ALL WHO HATE US" (Luke 1:67, 68, 71). The prophetess Anna was looking "for the redemption of Jerusalem" (Luke 2:36-38).

Part of the reason why physical peace and prosperity are in view with Jesus' words is because of the opposite consequences for unbelief. Because Israel has rejected her Messiah, the consequences would be a literal destruction of the city. Thus, it is fair to conclude that just as there could be a literal destruction of the city of Jerusalem for unbelief, there also could be literal peace and security for Jerusalem if the people of Israel believed. To put it another way:

In sum, Luke 19:41-44 suggests that with Jesus' first coming there was a genuine presentation of kingdom blessings to the people of Israel. These kingdom blessings were linked with their acceptance of the King. This must be the case because Jesus says this is so and He wept over Israel's choice and the consequences for her rejecting Him. They are held responsible for not accepting their Messiah and the blessings that came with believing in Him. As McClain asserts,

"The historic fact that Israel did not receive Him, however, subtracts nothing from the reality of the offer and the divinely imposed obligation." [2]

Yet as Brent Kinman points out, the judgment of Luke 19:41-44 is not permanent:

"Jesus' announcement at 19:41-44 need not represent a definitive or final break between God and Israel—as in the Old Testament, the aim of chastisement visited upon Jerusalem is restoration." [3]

Luke 19:41-44 shows that kingdom conditions had been presented to Israel. But because of Israel's unbelief, there would be disastrous national consequences. These consequences occurred in A.D. 70 when Jerusalem was destroyed by the Romans. Sadly but accurately, Jesus' prediction came to pass. The day of visitation was missed.