A week after reportedly helping to scuttle a deal that would have left Iran able to build nuclear weapons, French President Francois Hollande visited Israel this week as local analysts hailed a return to the days when France was the Jewish state's closest ally.

One of Hollande's first public remarks after landing at Ben Gurion Airport was that he would "do everything possible to prevent Iran from attaining a nuclear weapon." 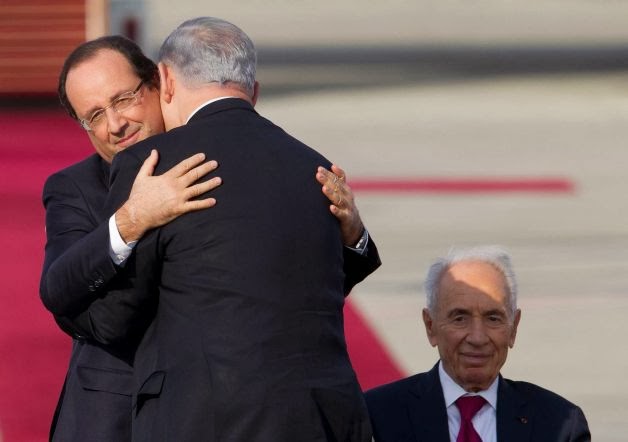 "France will not make concessions on nuclear proliferation," Hollande said just minutes after disembarking his plane. "France will maintain all its measures and sanctions until we are certain that Iran has renounced nuclear weapons."

Switching to Hebrew, the French leader declared, "I will always remains a friend of Israel."

In meetings with Prime Minister Benjamin Netanyahu and President Shimon Peres on Sunday, Hollande also pressed Israel to further facilitate the Middle East peace process, but he also insisted that in order for negotiations to advance, the Palestinians, too, must make gestures of goodwill.

Israel's daily newspapers welcomed what they called the "French Embrace." Many Israelis remember well the 1960s, when, beset on all sides by enemies determined to annihilate her, Israel found only one world power ready to sell her the weapons she desperately needed: France.

While comparisons with those heady days of warm Israeli-French relations are a nice distraction, some, like Yediot Ahronot columnist Shimon Sheifer caution that "what many see as a renewed 'honey moon' could end up bringing disappointment."

Fellow columnist Alex Fishman seemed to agree that the display of affinity between Israel and France "could be compared to an innocent attempt to arouse the jealousy of [Israel's] legal husband in Washington."

However, Fishman noted that there is also more to it than than. "This is about cold [mutual] interests," he explained, noting that both Israel and France have an opportunity to get what they want and need by "exploiting the continuing weakness of the US in the Middle East."

While Hollande's flowery rhetoric might in the end be little more than a political tactic, with their traditional best friends in Washington being so standoff-ish of late, Israelis are happy for a friendly smile and a supportive tone regardless.