Nasrallah Warns of "War" if No Iran Deal

(Netanya, Israel)—Sheikh Hassan Nasrallah, the head of the Lebanon-based Hezbollah terrorist organization—Iran's top ally in the Middle East—warned yesterday that a major regional war could be coming soon if Iran and world leaders don't make a deal. His warnings were ominously echoed by the White House and by Israeli Prime Minister Netanyahu. It's hard to remember when these three agreed on anything. 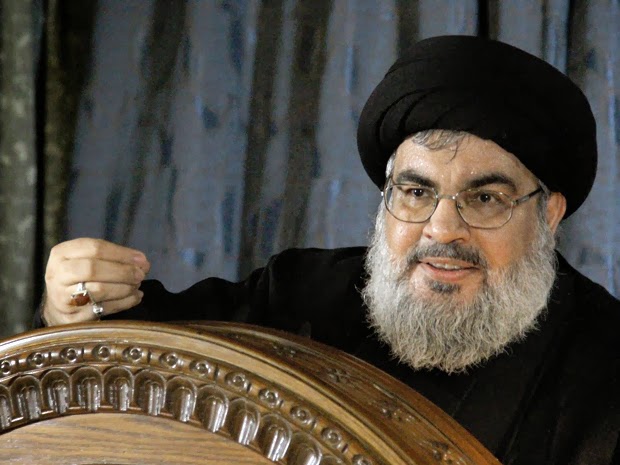 "To all Arab peoples in the Gulf countries of Saudi Arabia, Kuwait, Qatar, Bahrain, UAE and Oman: What is the alternative to an understanding between Iran and world leaders? It is regional war," Nasrallah warned.

"The Obama administration Tuesday stepped up lobbying against congressional action for new sanctions on Iran, with the White House warning such a move would lead to war," reported the Times of Israel.

"The American people justifiably and understandably prefer a peaceful solution that prevents Iran from obtaining a nuclear weapon, and this agreement, if it's achieved, has the potential to do that," White House spokesman Jay Carney told reporters. "The alternative is military action."

"Carney told reporters that Americans did not want a 'march to war,' which is what new sanctions would bring, indicating that lawmakers could pay politically if diplomacy with Iran failed," the Times noted.

"The currently discussed deal between six world powers and Iran could lead to war, Prime Minister Benjamin Netanyahu said Wednesday, intensifying his campaign against a possible interim agreement on Tehran's rogue nuclear program," reports the Times of Israel, in a separate article.

"There are not just two possibilities on the Iranian issue: A bad deal—or war. This is incorrect. There is a third possibility—and that is continuing the pressure of sanctions," Netanyahu said in the Knesset. "I would even say that a bad deal is liable to lead to the second, undesired, result."

"There is no reason to submit to Iranian diktats; neither is there any reason to be hasty," Netanyahu told the Knesset plenum. "Iran is under very harsh economic pressure and the advantage is with those applying the pressure. It is possible to reach a good deal to dismantle Iran's military nuclear capability. This cannot be achieved by the proposal now being discussed in Geneva. That proposal would make a gaping hole… through which the air could escape from the pressure of the sanctions."

Advisors to Netanyahu say the Prime Minister isn't opposed to a deal with Iran—just a bad deal. The premier believes the key is:

Iran and the P5+1 powers (U.S., Russia, China, U.K. and France, plus Germany) are scheduled to meet again on November 20th in Geneva.

Let's not cease to pray for peace, even as we prepare for the possibility of war.