Kerry to Israel: International Forces Will Protect You

During his visit here last week, Secretary of State John Kerry pressed Israeli Prime Minister Netanyahu to come to an accommodation to create a Palestinian state, with particular emphasis on current talks focusing on the strategic Jordan Valley, according to informed Israeli and Palestinian diplomats.

The diplomats told KleinOnline that Kerry rejected a proposal by Netanyahu for an interim deal, instead expressing the Obama administration's goal of a final status agreement to create a state before 2016.

Netanyahu had proposed a five-year interim agreement in which Israel would give the Palestinian Authority sovereignty over one-third of what is known as Area C, territories in the West Bank currently under Israeli control, the diplomats said. Israel would still retain some security presence in those areas.

During the five-year period, the PA would be required to take steps to remove incitement from official educational and media material and fully dismantle the terrorist apparatus in the West Bank.

The Netanyahu deal also called for the PA to lead a public campaign that would clarify that a final deal would be achieved with Israel as the homeland of the Jewish people, meaning no so-called right of return, the diplomats told KleinOnline.

According to the Israeli and Palestinian diplomats, both Kerry and PA President Mahmoud Abbas rejected Netanyahu's proposal.

Kerry also asked Netanyahu to not put any obstacles in the way of a U.S. plan for the Palestinians and international forces to assume control in the Jordan Valley.

Last month, KleinOnline broke the story that Kerry was pressing hard for Israel to give up the strategic Jordan Valley in a deal with the Palestinians.

The current round of U.S.-brokered talks is attempting to hash out the details of a plan for the valley.

Kerry's proposal calls for international forces to maintain security control along with unarmed Palestinian police forces, the PA negotiator said. Israel would retain security posts in some strategic areas of the Jordan Valley, according to the U.S. plan.

Previous talks incorporated an element of Jordanian authority in the Jordan Valley, but the Kingdom of Jordan is suddenly wary of participating in a future Palestinian state, the negotiator said.

A Palestinian negotiator speaking to KleinOnline pointed to the insurgency in Syria and changes of leadership in Egypt as reasons for Jordanian reluctance to assume any security control over Palestinian areas.

The Jordan Valley cuts through the heart of Israel. It runs from the Tiberias River in the north to the Dead Sea in the center to the city of Aqaba in the south of the country, stretching through the biblical Arabah desert.

The negotiator, meanwhile, said Kerry is urging an all-encompassing final status deal on the Jordan Valley, West Bank and sections of Jerusalem, including the Temple Mount.

Israel, on the other hand, would rather have an interim deal to ensure the Palestinians keep their side of the bargain, according to informed Israeli diplomatic sources. 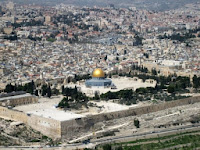 KleinOnline reported in July the terms of the Obama administration plan in which the Palestinian Authority and Jordan would receive sovereignty over the Temple Mount while Israel would retain the land below the Western Wall, according to a senior PA negotiator. The plan remains in effect as the basis for negotiations.

The Temple Mount is the holiest site in Judaism.

Israel has not agreed to the U.S. plan for the Temple Mount, with details still open for discussion, stated the PA negotiator.

The negotiator, who is one of the main Palestinian figures leading the Arab side of the talks, further divulged Kerry's proposed outline for a Palestinian state as presented orally to Israel and the PA.

He said Jordan has been invited to play a key role in the discussions surrounding both the Temple Mount and Jerusalem while it will be the PA, with some Jordanian assistance, that would ultimately receive control of some of those areas.

KleinOnline was first to report in 2007 that Jordan had been quietly purchasing real estate surrounding the Temple Mount in Jerusalem hoping to gain more control over the area accessing the holy site, according to Palestinian and Israeli officials.

Meanwhile, regarding the rest of Jerusalem, Kerry's plan is to rehash what is known as the Clinton parameters. The formula, pushed by President Bill Clinton during the Camp David talks in 2000, called for Jewish areas of Jerusalem to remain Israeli while the Palestinians would get sovereignty over neighborhoods that are largely Arab. Most Arab sections are located in eastern Jerusalem.

KleinOnline previously reported the Palestinians are building illegally in Jewish-owned areas of Jerusalem, resulting in Arab majorities in some neighborhoods.

When it comes to the West Bank, which borders Jerusalem and is within rocket range of Israel's main population centers, Kerry's plan calls for Israel to evacuate about 90 percent of its Jewish communities in the territory.

Israel would retain strategic security posts along with the West Bank's main blocs, Maale Adumin, Ariel and Gush Etzion. In return, Obama is calling for an exchange of territory with the Palestinians, with discussion being open for the Palestinians to possibly receive land in the Negev, in Israel's south.