Around 2:00am Sunday morning local time, Israeli fighter planes conducted another round of air strikes against Syrian targets. This was the second round of Israeli preemptive strikes in the last 48 to 72 hours. 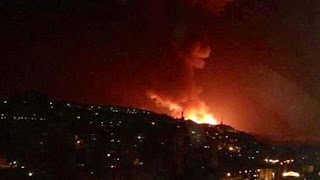 The targets were in and near the capital city of Damascus, and early reports indicate they included storehouses for advanced missiles that the Assad regime was preparing to transfer to the Iranian-backed Hezbollah terror group in Lebanon.

One thing is clear: Netanyahu is not waiting any longer for Obama to act. Israel is taking the lead in protecting its own national security.

Israeli officials see Syria imploding, and Iran, Hezbollah and other terror forces moving into the vacuum. They see Syria having used chemical weapons twice. Yet neither President Obama nor other world powers are doing anything about it. Israel has decided it cannot wait any longer for Washington.