Five Jewish men were arrested on Wednesday for quietly praying atop Jerusalem's Temple Mount, an expression of faith that caused the many Muslims around them to explode in fury.

Police stationed at the sensitive holy site said a mob of Muslims gathered around the Jewish men, hurling insults and nearly coming to blows before Islamic officials stepped in to restore calm on the condition the Jewish worshipers be arrested.

Jews and Christians are forbidden to pray atop the Temple Mount for fear of upsetting the Muslims that currently control the complex.

A day earlier, Israeli police at the Temple Mount arrested Jerusalem Mufti Sheikh Muhammed Hussein on suspicion he had riled up a mob of Muslims who attacked and wounded two officers.

The officers came under assault for quieting a young Muslim boy who had been yelling insults at another group of Jewish visitor who, incidentally, were not trying to pray at Judaism's holiest site. They were harassed simply for being Jews. 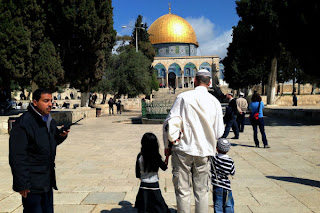 The director of Israel's Ministry of Religious Affairs on Wednesday promised to review and update the current laws prohibiting Jewish and Christian worship on the Temple Mount. The announcement was made during a session of the Knesset's Interior Committee entitled "Jewish ascension to and state authority on the Temple Mount."

Many have argued that by denying Jewish and Christian freedom of religion at the holy site, Israel has effectively demonstrated over the past five years that it, in fact, has no authority on the Temple Mount.