Many government leaders around the world joined the United States in expressing deep concern when the Kim Jong Un regime in North Korea began issuing threats several weeks ago to launch a new war on the divided Korean peninsula. Israeli officials were among them. However in the case of Israel, there is special concern since one of the few world allies that North Korea has is Iran, whose leaders have vowed many times to unleash weapons of mass destruction upon the small Jewish State. Bellicose threats that the cities of Tel Aviv and Haifa will be entirely wiped out is seen in Jerusalem as a clear allusion to the deployment of nuclear weapons. 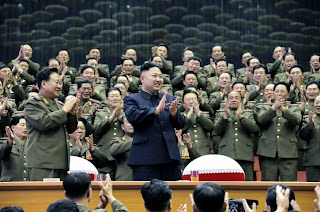 Israeli officials note there is strong evidence that the two rogue nations have been clandestinely working together to develop nuclear warheads for over a decade. Security analysts warn that if the United States becomes embroiled in a new war with North Korea, it might prod Tehran to order a massive rocket strike upon Israel. This would probably be carried out by Iran’s surrogate Hizbullah militia force, which possesses tens of thousands of rockets.