Why Conservatives Should End the Debt Ceiling Debate

Watching the American scene in the 1960s, historian Daniel Boorstin, invented the idea of the "pseudo-event." The rise of television and modern mass media had produced a transformation of the news business, so that what now mattered was not if an event was important, but only if it was "newsworthy." 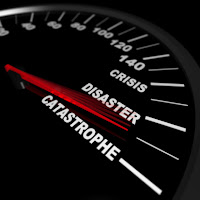 Sound familiar? The pseudo-event is the driving force of American political life today, and it is a game increasingly played by both major political parties. The "fiscal cliff" was the most embarrassing recent example of a pseudo-event. Democrats and Republicans alike conspired to create a fake political crisis that each party thought would work to its own advantage. Both parties gambled that public outrage over the loss of Bush-era tax cuts would create a manufactured political crisis that would give the party and its allies political leverage.

Democrats gambled that they would get new tax revenues out of the crisis, while Republicans hoped for spending cuts. In the end, the negotiated "fix" for the pseudo-crisis was a weak combination of increased tax revenue and promised, yet unspecified, spending cuts.

The entire enterprise was tantamount to a war game played with live ammunition. Both sides claimed a modicum of victory and promised to play the game to better advantage next time. Neither side was willing to deal with what the real crisis of governance represents. The "fiscal cliff" was just a dramatic distraction from the real crisis.

As columnist David Brooks argued, "Far from laying the groundwork for future cooperation, it sentences the country to another few years of budget trench warfare. There will be a fight over drastic spending cuts known as sequestration, then over the debt limit and on and on."

As Brooks predicted, the same debacle is now being played out with the debt limit pseudo-event. Both parties are jockeying for position. The nation has already exceeded the $16.4 trillion borrowing limit previously set by Congress. A bit of financial finagling by the Department of the Treasury has bought just a bit of time before Congress must raise the debt ceiling once again. Otherwise the United States will default on its debt.

How did this happen? Congress approved the spending, as did the President. The spending, which necessitated the borrowing, was approved by the very people who will not debate whether to pay the bills they themselves created.

Federal law requires Congress to establish a limit to national borrowing, but the U. S. Constitution requires the government to pay its debts. The debt limit requirement is merely a matter of law. The pledge to pay the nation’s debt is a mandate of the Constitution. The debt ceiling is now a political abstraction, used by both parties to create a pseudo-event.

Conservatives should be particularly unwilling to participate in such a charade, and yet many do so, thinking they can use the pseudo-event to their advantage. It is a losing game, dishonest politics, and a failure of governance.

It is intended to direct the nation’s attention away from the real crisis and onto the pseudo-event. It avoids dealing with the real disaster that looms before us.

"Public debt as a percentage of gross domestic product was around 38 percent in 1965. It is around 74 percent now. Debt could approach a ruinous 90 percent of G.D.P. in a decade and a cataclysmic 247 percent of G.D.P. 30 years from now, according to the Congressional Budget Office and JPMorgan."

But, do politicians bear all the blame? Not hardly. The public has an insatiable appetite for pseudo-events and a horrified aversion to the truth. Why? We are approaching the point that voters will not deal with the issue because it will cost them their entitlements. They will be glad for their children and grandchildren to pay the catastrophic debt.

"Ultimately, we should blame the American voters. The average Medicare couple pays $109,000 into the program and gets $343,000 in benefits out, according to the Urban Institute. This is $234,000 in free money. Many voters have decided they like spending a lot on themselves and pushing costs onto their children and grandchildren. They have decided they like borrowing up to $1 trillion a year for tax credits, disability payments, defense contracts and the rest. They have found that the original Keynesian rationale for these deficits provides a perfect cover for permanent deficit-living. They have made it clear that they will destroy any politician who tries to stop them from cost-shifting in this way."

Given this political reality, fiscal conservatives are insane to believe that these pseudo-events play to their advantage. Each "solution" to a false crisis actually lets the American people and the political class claim a false victory—even as the real crisis grows far worse.

Conservatives should just point out that the Constitution demands that the nation pay its debts, and that Congress and the President must take responsibility for the spending—and the massive borrowing—that their actions mandate. Conservatives should point to the real crisis, stand on principle, and refuse to distract themselves and the American people with false crises and pseudo-events.

In the end pseudo-events only serve to make the problem worse, never better. We cannot deal with the real crisis, if we keep playing the game of the pseudo-event.