Who Is Naftali Bennett and Why Is His Party Climbing So Fast in the Israeli Polls?

Few Americans have heard of Naftali Bennett. But the 40-year old former software entrepreneur and his right-wing political party, The Jewish Home (Habayit Hayehudi), is taking the Israeli political scene by storm.

Bennett's party currently has three seats in the Knesset (parliament). But his support is surging. Some recent polls suggest Bennett and his team could end up with 12 or 13 seats after the January 22nd elections. Some polls, however, suggest Bennett’s team could win as many as 15 to 18 seats, emerging as Israel’s third—or possibly second—largest party. 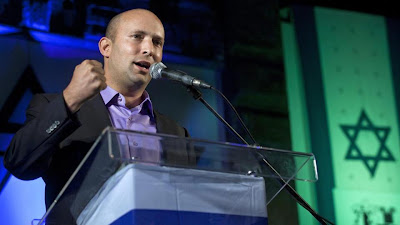 Bennett is married. He’s the father of four young children under the age of eight. Religious. Zionist. Served in one of Israel’s most elite army combat units, Sayeret Matkal. Went into business. Created a software company that he sold for millions. Served as the director of the Yesha Council, the governing body of the Jewish settler movement on the West Bank. Served from 2006 to 2008 as Netanyahu’s chief of staff before breaking off and charting his own political path, to the right of his mentor. Says Netanyahu is too willing to compromise with the Palestinians, too willing to create a Palestinian state, which Bennett vigorously opposes. "I will do everything in my power to make sure they never get a state," he says of the Palestinians.

Netanyahu in December directed sharp criticism at Bennett, whose recent comments suggest IDF soldiers shouldn’t obey if orders are ever given to dismantle Jewish settlements in the West Bank. "Anyone who refuses [a command] won’t be a minister in my government," Netanyahu said in his first television interview since the launch of the Likud election campaign.

Bennett quickly backed off and clarified that he—and all IDF officers and soldiers—must obey civilian government orders. But the dust-up didn’t seem to hurt him. His name ID soared in Israel, and an analysis by the Times of Israel shows that the more Israelis learn about Bennett’s personal story and style and political views, the more they like him.

A lengthy profile in The New Yorker this month is worth reading. Manhattan liberal elites—along with Tel Aviv liberal elites—are stunned by Bennett’s rise. Author David Remnick argues that the Israeli electorate is moving sharply to the right because they are exhausted by the conflict with the Arabs; disillusioned with the peace process; increasingly convinced the Palestinians will never make peace; anxious about the instability and anti-Israeli hostility in surrounding nations like Syria, Egypt and Jordan; worried about the Iranian nuclear threat; and convinced that the Israeli left has no fresh ideas and no dynamic leaders. Is he right? I'm not a big fan of left-wing publications like The New Yorker, and I certainly don’t typically see eye to eye with Remnick, but I found it interesting to view Israel through their eyes.