Why Abortion Is the Most Important Issue This Election

On Nov. 6, America will go to the polls and elect the next president as well as members of the House and Senate. In advance of this vote, most Americans believe that the chief issue facing the country is the ailing economy. I want to make the case that this thinking is wrong-headed and that the transcendent issue of this election is abortion. 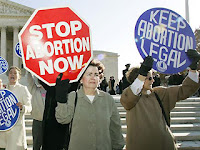 The current law of our land excludes from the human community a whole class of human beings—the unborn. Right now, under the regime of Roe v. Wade, it is legal in our country to kill unborn human beings at any stage of development from zero to nine months' gestation—for any reason. In other words, our nation's laws do not recognize an intrinsic right to life for the unborn. In some cases, animals have more protection under the law than do unborn people.

The Roe v. Wade decision has presided over the deaths of more than 50 million innocent human babies since 1973, and it stands as the singular legal obstacle to passing laws restricting abortion in our country. The only way for the unborn to be protected in law is for Roe to be overturned. It will take a five-person majority on the Supreme Court to overturn Roe. Absent such a majority, it will continue to be legal for unborn babies to be killed.

As of now, it appears there is a 5-4 majority on the Supreme Court in favor of Roe. The candidate who wins the presidency will appoint justices who will either bolster the current majority in favor of Roe or will make a new majority against Roe. In effect, this election is a referendum on the legality of abortion.

Neither of the presidential candidates is perfect, but they are nevertheless very different concerning the issue of abortion. On the one hand, Barack Obama has pledged his unqualified support for Roe v. Wade. His unswerving commitment to Roe even led him once to oppose a law that would have protected survivors of botched abortions. On the other hand, Mitt Romney has said that Roe v. Wade is a flawed decision that must be overturned.

With more than 50 million babies already dead in America, is it not clear that abortion-on-demand is the greatest human rights crisis of our time? The only reason that people do not feel the weight of this horror is that abortion is largely out of their view. The cries of aborted babies do not escape their mother's womb, and citizens don't hear the screams that would otherwise provoke the repugnance of any decent person.

Proverbs 24:11-12 talks about the responsibility that we all share to protect innocent human life:

"Rescue those who are being taken away to death; hold back those who are stumbling to the slaughter. If you say, 'Behold, we did not know this,' does not he who weighs the heart perceive it? Does not he who keeps watch over your soul know it, and will he not repay man according to his work?'"

How does this text inform Christians about how they should vote this November? I would argue that it informs your conscience in at least four ways, each of which I urge you to consider prayerfully.

First, you are commanded to "rescue" innocent human life from being unjustly snuffed out. This command issues from the same God who said "thou shalt not kill" and "thou shalt not bear false witness," and it has the same authority over our consciences. How do we "rescue" the unborn? In America today, we cannot reduce the protection of the unborn to a matter of electoral politics. Supporting adoption alternatives and crisis pregnancy centers, for instance, are a part of rescuing the innocents being led to slaughter. That being said, while we certainly should not reduce our defense of the unborn to electoral politics, we dare not exclude electoral politics from our concern. Thus you should use your democratic privileges to press for the defense of the unborn. If we were in China or Saudi Arabia, you wouldn't have a say in the matter. But in America you do. Why wouldn't you vote to protect life?

Second, at the last judgment you will not be able to claim ignorance about your duty to defend innocent human life. Remember, more than 50 million innocent human lives have been snuffed out legally since 1973. If somehow you were unaware of this fact before reading this essay, you now know better. You are accountable for this knowledge, and your vote should reflect it.

Fourth, do not be deceived. God will hold you accountable for how you vote. The Proverb says that God will "repay" each person according to what he has done. There are many "works" that we will have to give an answer for at the last judgment, and our voting will be one of them. Do you think a vote against protecting the unborn will be mitigated at the judgment by arguments like, "Abortion is only one issue among many," "Single-issue voting is small-minded" and "The pro-abortion candidate agrees with me on other important issues"?

The world is broken, and at the end of the day, we do not put our hope in our government to fix it (Psalm 20:7). Our hope is in a sovereign and just God who will one day make all things new (Revelation 21:5). But our hope in God's perfect justice in the future should never be used as an excuse to be indifferent about injustice in the present. My hope and prayer is that more people will be convinced of that truth as they go to the polls this November. And that is my hope and prayer for you. Don't use your vote to exclude a whole class of persons from the human community. Choose life.