The doctrine of annihilationism teaches that man was created immortal. But those who continue in sin and reject Christ are by a positive act of God deprived of the gift of immortality and are ultimately destroyed.

Another view, called "conditional immortality," argues that immortality is not a natural endowment of man, but is rather a gift of God in Christ only to those who believe. The person that does not accept Christ is ultimately annihilated and loses all consciousness. Some of the advocates of these doctrines teach a limited duration of conscious suffering for the wicked after death, after which time they are annihilated. 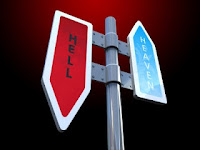 There are many passages that refute annihilationism. For illustration purposes, we will select only one primary passage—Matthew 25:46: "Then they will go away to eternal punishment, but the righteous to eternal life."

By no stretch of the imagination can the punishment spoken of in Matthew 25:46 be defined as a nonsuffering extinction of consciousness. Indeed, if actual suffering is lacking, then so is punishment. Let us be clear on this: punishment entails suffering. And suffering necessarily entails consciousness.

Bible scholar John Gerstner tells us that "one can exist and not be punished; but no one can be punished and not exist. Annihilation means the obliteration of existence and anything that pertains to existence, such as punishment. Annihilation avoids punishment, rather than encountering it."

The very fact that people will suffer varying degrees of punishment in hell shows that annihilation or the extinction of consciousness is not taught in Matthew 25:46 or anywhere else in Scripture. These are incompatible concepts.

We must emphasize that torment cannot, by definition, be anything but conscious torment. One cannot torment a tree, a rock, or a house. By its very nature, being tormented requires consciousness. Bible scholar Alan Gomes correctly points out that "a punishment [such as torment] that is not felt is not a punishment. It is an odd use of language to speak of an insensate (i.e., unfeeling), inanimate object receiving punishment. To say, 'I punished my car for not starting by slowly plucking out its sparkplug wires, one by one,' would evoke laughter, not serious consideration." We repeat, then, that punishment entails consciousness!

A critical point to make in regard to Matthew 25:46 is that this punishment is said to be eternal. There is no way that annihilationism or an extinction of consciousness can be forced into this passage. Indeed, the adjective aionion in this verse literally means "everlasting, without end." As noted earlier, this same adjective is predicated of God (the "eternal" God) in 1 Timothy 1:7, Romans 16:26, Hebrews 9:14, 13:8, and Revelation 4:9. The punishment of the wicked is just as eternal as our eternal God.