The objective interpreter of Scripture seeks to discover the author's intended meaning (the only true meaning). We must recognize that what a passage means is fixed by the author and is not subject to alteration by readers. Meaning is determined by the author; it is discovered by readers. [1]

Our goal must be exegesis (drawing the meaning out of the text) and not eisegesis (superimposing a meaning onto the text). By using eisegesis instead of exegesis, a Marxist interpreter could, for example, so skew the meaning of the U.S. Constitution that it comes out sounding like it supported socialism. [2] Esotericists have done the same type of thing with God's Word. They approach Scripture with a particular mystical preunderstanding and so skew the meaning of the biblical text that it comes out saying something entirely different than what was intended by the author.

Certainly an esoteric interpreter would object if an orthodox Christian interpreted Eastern mystical texts in such a way that they came out sounding like they support orthodox Christianity. [3] The Christian would be guilty of reading something into the Eastern text that simply is not there, and would be rightly reprimanded by the esotericist. Groothuis thus suggests that the Golden Rule applies here: 'Interpret others' texts as you would have them interpret your own." [4] 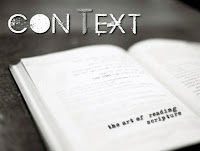 In seeking the biblical author's intended meaning, it is critical to interpret Bible statements in context. Every word in the Bible is part of a sentence; every sentence is part of a paragraph; every paragraph is part of a book; and every book is part of the whole of Scripture. There is thus both an immediate and a broader context of a given verse.

The broader context of any given text is the whole of Scripture. We must ever bear in mind that the interpretation of a specific passage must not contradict the total teaching of Scripture on a point. Individual texts do not exist as isolated fragments, but as parts of a whole. The exposition of these texts must therefore involve exhibiting them in right relation both to the whole and to each other. This principle is grounded in the fact that each of the biblical writers wrote within the larger context of previous biblical teaching. And they all assumed that all of Scripture—though communicated through human instruments—had one Author (God) who didn't contradict Himself (2 Pet. 1:21).

Historical considerations are especially important as a backdrop in ascertaining the author's intended meaning. Christianity is based on historical fact. More specifically, Christianity rests on the foundation of the historical Jesus of Nazareth whose very life represents God's full and objective self-communication to humankind (John 1:18). In the empirical (experiential) world of ordinary sense perceptions, Jesus was seen and heard by human beings as God's ultimate revelation (1 John 1:1-3). This is why He could claim, "If you really knew me, you would know my Father as well" (John 14:7).

The apostle Paul warned the religious men of Athens of the objective reality of the future judgment of all humanity on the basis of the objective, historical evidence for the resurrection of Jesus (Acts 17:16f.). This evidence is recorded for us in propositional statements (i.e., affirmations of specific truths) in the New Testament Gospels, documents that are based on eyewitness testimony and written very close in time to the events on which they report. Based on how people respond to God's objective, historical revelation contained in Scripture, they will spend eternity in a real heaven or a real hell. Esoteric manipulation of truth will not be possible on the day of judgment.

Illumination by the Holy Spirit

Esotericists rely on their own inner "illumination" to determine the hidden meaning of Scripture verses. Orthodox Christians, by contrast, rely on the Holy Spirit's illumination to gain insights into the plain meaning and application of Scripture (John 16:12-15; 1 Cor. 2:9-11). The Holy Spirit as the "Spirit of truth" (John 16:13) guides us so that "we may understand what God has freely given us" (1 Cor. 2:12). This is quite logical: full comprehension of the Word of God is impossible without prayerful dependence on the Spirit of God, for He who inspired the Word (2 Pet. 1:21) is also its supreme interpreter.

It is beyond the scope of this article to provide a full discussion of the Holy Spirit's ministry of illumination. Other good sources are available for this. [5] However, I do want to emphasize that this aspect of the Holy Spirit's ministry operates within the sphere of man's rational capacity, which God Himself gave man (cf. Gen. 2-3). James Sire comments that "illumination comes to the 'minds' of God's people—not to some nonrational faculty like our 'emotions' or our 'feelings.' To know God's revelation means to use our minds. This makes knowledge something we can share with others, something we can talk about. God's Word is in words with ordinary rational content." [6]

Related to this, theologian Roy B. Zuck reminds us that the ministry of the Holy Spirit in interpretation does not mean interpreters can ignore common sense and logic. Since the Holy Spirit is "the Spirit of truth" (John 14:17; 15:26; 16:13), "He would not teach concepts that failed to meet the tests of truth. The Holy Spirit does not guide into interpretations that contradict each other or fail to have logical, internal consistency." [7]

It must also be kept in mind that the function of the Holy Spirit is not to communicate to the minds of people any doctrine or meaning of Scripture that is not contained already in Scripture itself. The Holy Spirit makes men "wise up to what is written, not beyond it." [8] Indeed, "the function of the Spirit is not to communicate new truth or to instruct in matters unknown, but to illuminate what is revealed in Scripture." [9]

One further point bears mentioning. Though esotericists claim to depend on their own "inner illumination," they are utterly blind to the possibility, as Sire has noted, that the unholy spirit—Satan, the Father of lies—may be behind their "illumination" and that Satan is a crafty misinterpreter of God's Word. Indeed, in his attempt to bring about Christ's downfall, he quoted two passages out of context (Matt. 4:1-11). Christ responded by quoting the Word of God in context, thus defeating Satan's purposes. However, though Satan lost in this encounter with Jesus, he is still promoting the misinterpretation of Scripture through esotericism.