Over the last year, I have watched Syria and occasionally reported on the crisis there. However, it seems that even though much has transpired there—as many as 19,000 have been killed in the violence—nothing really changed. The unrest in Syria began in the early days of the "Arab Spring," which erupted in February, 2011. Yet today, 17 months later, Bashar al-Assad's regime is still in control and maintains that control via a military that remains essentially intact.

Now it appears that the Assad dynasty may be nearing its end. Whether Bashar al-Assad is assassinated, hands over power peacefully, or makes his escape a few steps ahead of the pursuing rebel forces, it seems to be just a matter of time before Syria becomes a radically different nation. And that prospect is causing more than a few sleepless nights throughout the neighborhood. 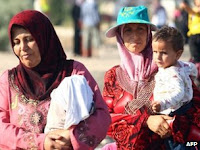 As I look at the Middle East this week, one word springs to mind: "confusion." The civil war in Syria is no ordinary civil war. The nation of Syria is critical to several different players—all of whom figure prominently in the end-times scenario:

But these competing agendas are not the only elements that complicate the crisis. Syria has major stockpiles of biological and chemical weapons—many of which they received from Saddam Hussein shortly before the Coalition invasion of Iraq. They also have the missiles to deliver the bio/chem warheads.

Recently, Syrian security forces have been observed moving these bio/chem weapons to various staging areas around the country. Of course, the main fear is that they will use them to suppress the rebellion. But it's not inconceivable that Assad may launch these weapons against Israel to draw other Muslim nations into the fray (and establish his legacy among Muslim leaders).

Of course, Israel has let it be known that any bio/chem attack against Israel will be answered swiftly and decisively. And the Prophet Isaiah's yet-to-be-fulfilled prophecy that Damascus will be destroyed overnight looms large at a critical moment like this.

As if this weren't enough intrigue for one week, the 2012 London Olympics begin today. The International Olympic Committee refuses to observe a moment of silence in memory of the Israeli athletes who died in the Munich Massacre 40 years ago. The London Sunday Times is reporting that Scotland Yard and Britain's intelligence service, MI5, have warned Israel that they've uncovered a potential threat to the Israeli delegation from an Iranian hit squad. And the BBC got into the act by refusing to identify Jerusalem as the capital of Israel on its official Olympics website. Israel is the only nation among the competitors that has a "seat of government," not a "capital." I suppose anti-Semitic bigotry can extend even to the pettiest gestures.

The 'End of Times'

Finally, just to light the candles on the cake, last week Iran's Supreme leader, the Ayatollah Ali Kahmenei delivered a major address to the nation through the state media. In it, he reminded followers worldwide that we are now living in the "end of times." He didn't mince words when he notified the world of his and Iran's intentions. He said,

"The issue of Imam Mahdi is of utmost importance, and his reappearance has been clearly stated in our holy religion of Islam.... We must prepare the environment for the coming so that the great leader will come."

If you recall, Imam Mahdi is Islam's messiah figure. He has been dead for centuries, but is predicted to reappear on earth amid an apocalyptic and catastrophic war. He will defeat Islam's enemies and subdue the world for Islam. Many Muslims—including Ayatollah Khamenei and Iranian President Mahmoud Ahmadinejad—believe it is their duty to create the conditions that will usher in the Mahdi. That means they feel it's their responsibility to start an apocalyptic war. And they say so publicly, even from the podium of the United Nations!

Yet western leaders and the media refuse to take them at their word. Instead, they insist that evangelical Christians who believe in the Rapture of the church and the Second Coming of Jesus Christ are the ones who want to start Armageddon so Jesus will return!

Oh, well, that's just the sort of upside-down thinking (and blindness) the Bible prophets predicted for these days—the "end of times."