Report: US Sees Israeli Strike on Iran in October

A senior and widely respected analyst with Israel's Channel 2 News said in Friday's pre-Shabbat newscast that top American officials have become convinced that Israel will launch a military strike against Iran's nuclear facilities in October, just one month before the US presidential election.

Ehud Yaari had just returned from a trip to Washington, where he told viewers that he had met with "the people one needs to talk with about this matter," and that "my impression is that the Americans are convinced that there is very high chance that Israel will decide to attack in Iran before the elections in the US."

According to Yaari, American officials see an Israeli strike on Iran as almost a foregone conclusion, and are focusing on their response to the possible outcomes of such an action. 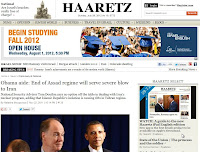 US Shares Contingency Plan for a Possible Attack on Iran

An unnamed American official cited by the newspaper suggested that the Obama White House was increasingly seeing the futility of the diplomatic tug-of-war between Iran and the international community, and was working feverishly to put together a viable attack plan.

That source said that Netanyahu had received a detailed overview of the developing American attack plan and the weapons that would be brought to bear on Iran's nuclear facilities should it be enacted.

Last week, Israeli Defense Minister Ehud Barak stated that as much as both Israel and the US may want to avoid striking Iran, attacking its nuclear program now would be far less costly and deadly than dealing with a nuclear-armed Iran in the future.