BBC, Others Tread on Thin Ice

A Christian law firm says it's absolutely outrageous that despite an appeal from Prime Minister Benjamin Netanyahu, the British Broadcasting Company still refuses to acknowledge Jerusalem as Israel's capital on its Olympics website.

The American Center for Law & Justice is concerned about the recent revelation that the BBC—which holds the rights to broadcast this year's Olympic games and is considered the largest broadcast organization in the world—intentionally refuses to list Jerusalem as the capital of Israel on its official Olympics website. 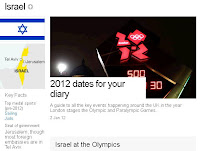 BBC Olympics 2012 Website Omits Jerusalem as the Capital of Israel

Jordan Sekulow, executive director of the ACLJ, says the Olympics should transcend politics.

"Things have changed since the prime minister's office contacted the BBC, but they still will not recognize Jerusalem as the capital," Sekulow tells OneNewsNow. "What their website says now is that Jerusalem is the seat of government but [that] most foreign embassies are in Tel Aviv. And then for the Palestinians, it says that their intended capital is East Jerusalem, but that their government administrative offices are in Ramallah. So you see the playing politics."

The ACLJ spokesman adds that White House press secretary Jay Carney's refusal to acknowledge Jerusalem as Israel's capital during a recent White House news conference illustrates that the bias against Israel goes way beyond the BBC.

"For far too long we have resisted what an act of Congress overwhelmingly passed in the House and Senate in 1995 [that] called for the United States to recognize Jerusalem as the capital of Israel officially and to move our embassy from Tel Aviv to Jerusalem," he explains. "There is a plot of land ready and reserved in Jerusalem for us to build an embassy."

But Sekulow says both Republican and Democratic administrations have refused to do so. But during his current trip to the Holy Land, presumptive GOP presidential candidate Mitt Romney referred to Jerusalem as "the capital of Israel."