When God Is in Control

The United States of America clearly leads the world. From technology to debauchery, this one nation stands above the rest. But it will not continue forever. History clearly teaches that empires rise and fall. America’s two-hundred-year history is brief compared to Egypt, whose kingdoms endured for almost three thousand years. What is the reason for such ebb and flow of nations? The answer is simple: Kingdoms rise and fall because God is in control.

The prophet Daniel recorded amazing prophecies of God’s sovereign control of history. He lived during two great kingdoms, the Babylonian and Persian empires. He was a political statesman whose career spanned the demise of the former and the rise of the latter. Daniel was also a prophet. Through him, God revealed to His people Israel a vast vision of the future. In the following two dreams, Daniel recorded the rise and fall of all human empires and the establishment of God’s eternal kingdom.

The King’s Dream—Daniel Chapter 2. King Nebuchadnezzar of Babylon faced a night of turmoil that continued into the next day (Dan. 2:1–30). A frightening dream kept haunting him. His counselors offered to interpret the dream if the king would tell them its details. The king refused. The wise men would have to prove their wisdom by providing both the dream and its interpretation—or die. The advisors realized their doom. But their hopes awakened when word came from a young Jewish man who offered to reveal the contents of the dream as well as its interpretation, but only because his God had revealed it to him. As Daniel approached the king, Nebuchadnezzar listened in utter amazement.

In the dream stood a huge statue (Dan. 2:31–35). Daniel described it thoroughly. Its head was made of pure gold, shining in all its splendor. It had a chest and arms of silver. The belly and thighs were made of bronze. The statue had iron legs, and the feet were a combination of iron and clay. Suddenly a stone smashed the statue’s feet, causing the entire image to crumble and be blown away. The stone then became a great mountain that filled the entire world.

Then Daniel told the meaning (Dan. 2:36–45). Daniel declared that Nebuchadnezzar himself, the king of Babylon, was the head of gold. The remaining parts of the statue represented successive kingdoms whose identities in history are now known. The silver chest stood for Medo-Persia, the bronze thighs for Greece, and the iron feet for Rome. The mixed iron and clay represented a kingdom that would be divided—strong yet fragile. The Lord apparently revealed a twofold appearance of the Roman Empire. There is a difference between the Rome of old (the iron legs) and the Rome to come (the iron and clay feet). The strong yet fragile feet represent the second phase of the Roman Empire.

This dream recorded a humanistic vision of mankind. The governments of the world seemed like a colossal statue of man’s greatness. Yet the progress of that greatness diminished. As the value of the metal decreased, its strength increased, except for the feet. Humanity’s achievements are top-heavy with pride and will eventually collapse. The dream also revealed that the Gentile world would, for a time, rule the people of Israel. Israel could have been the head; it has instead become the tail (Dt. 28:13, 44). Disobedience caused this reversal, but it is temporary. Notice how the dream continues:

“The God of heaven [will] set up a kingdom, which shall never be destroyed; and the kingdom shall not be left to other people, but it shall break in pieces and consume all these kingdoms, and it shall stand for- ever” (Dan. 2:44).

The stone that smashed the kingdoms of mankind represents the Kingdom of God. This cataclysmic event will signal the end of man’s rebellious kingdom, and God’s righteous reign on earth through His Messiah will begin. Daniel ended his prophecy to the king with these words:

“God hath made known to the king what shall come to pass hereafter; and the dream is certain, and the interpretation of it sure” (Dan. 2:45). 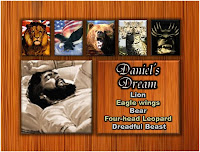 The Prophet’s Dream—Daniel Chapter 7. Not only did the pagan king have a dream, but the holy prophet Daniel experienced one also (Dan. 7:1–8). He saw four huge beasts coming up from the wind-tossed sea. The first was like a lion with eagle’s wings. The second appeared to be a bear with three ribs in its mouth. The third resembled a leopard with four wings on its back. The fourth beast was incomparable to any other. Daniel could only describe it as “dreadful and terrible, and strong exceedingly” (Dan. 7:7). He also noted that it had iron teeth and trampled the rest of the beasts. It did have one notable feature—ten horns. Yet, while Daniel was watching, another little horn emerged and uprooted three horns. This “little horn” had two human features: two eyes and a boastful mouth.

Daniel’s dream also included a scene in heaven (Dan. 7:9–14). On a blazing throne sat the Ancient of days. With thousands of beings attending Him, a judgment scene unfolded. Then the little horn’s boastful words were heard, and the fourth beast was slain and burned with fire. Daniel then saw a person, the “Son of man,” standing before the Ancient of days. This one was to receive authority over God’s kingdom, “that all people, nations, and languages should serve him; his dominion is an everlasting dominion, which shall not pass away, and his kingdom that which shall not be destroyed” (Dan. 7:14). Daniel clearly saw the Messiah, who would be both human and divine.

These images perplexed the prophet (Dan. 7:15–28). A heavenly messenger provided the interpretation. The four beasts symbolized four kings and their kingdoms. The ten horns of the last beast represented ten kings. The little horn will be another king who will oppose God and oppress His people. He will change established times and laws. Yet his persecution of the saints will last only for a designated period of time. Then God’s heavenly court will convene and condemn the great persecutor. He will be destroyed forever. Finally, “the greatness of the kingdom under the whole heaven, shall be given to the people of the saints of the Most High, whose kingdom is an everlasting kingdom, and all dominions shall serve and obey him” (Dan. 7:27).

God revealed similar truths to both Nebuchadnezzar and Daniel. The king’s dream visualized human empires in an imposing statue representing man’s greatness. The prophet’s dream revealed God’s viewpoint of these humanistic attempts at selfish rule—wild beasts. Even the level of animals descends from the stately lion to an ugly, unknown creature. The two dreams share the identical interpretation from two different perspectives. The four metals of the statue and the four beasts from the sea represent the same kingdoms. Babylon ruled from 626 to 539 B.C. Then Medo-Persia dominated the world from 539 to 330 B.C. The Greek empire of Alexander the Great defeated the Persians and ruled from 330 to 146 B.C. Then Rome gained world power and ruled until the western branch of the empire fell in 476 A.D., and the eastern branch fell in 1453. In an amazing way, God unveiled the future to Daniel’s generation, and we have the privilege of looking back on prophecy fulfilled in history.

The Prophecy to Be Fulfilled

A final stage of the Roman Empire will appear near the end of Gentile domination of world history. The stereoscopic prophecies painted this future empire as two figures: first, as iron and clay feet having ten toes (2:33, 41–43) and second, as an indescribable beast having ten horns and one little horn (Dan. 7:7–8, 19–25). No historical evidence exists that matches these descriptions. When the elements of this prophecy are compared with other Scriptures, it is clear that the final Rome is yet to come.

Notice the following parallels: Jesus Christ referred to Daniel’s prophecies as future. He predicted that “Jerusalem shall be trodden down by the Gentiles, until the times of the Gentiles be fulfilled” (Lk. 21:24). That unique phrase, “the times of the Gentiles,” refers to the period of history that began when Jerusalem was conquered by Babylonian King Nebuchadnezzar in 586 B.C. Since then, Gentile domination of Jerusalem has continued and will do so in the future. Only at Jesus’ return will the holy city return to the unqualified control of the Jewish people under their Messiah.

Jesus also described the great event after the future Tribulation.

He applied the phrase from Daniel 7:13, “the Son of man came with the clouds of heaven,” to Himself! Jesus Christ, the Son of man, will someday return from heaven and establish His Kingdom on earth. (See also Revelation 19:11–21.)

The apostle John introduced the last book of the Bible with words from the prophet Daniel,

The book of Revelation ends with a description much like Daniel’s dream. Notice the mention of thrones, a court for judgment, and the reign of the saints in Revelation 20:4.

“And I saw thrones, and they sat upon them, and judgment was given unto them…and they lived and reigned with Christ a thousand years.”

The New Testament supplies more details about the ten horns and the little horn of Daniel’s dream. Revelation describes the ten horns as ten kings, correlating with Daniel’s prophecy.

During the future Tribulation period, ten kings will emerge simultaneously and support one who will rule the world. That one is known as Daniel’s “little horn.” John referred to him as “the beast” (Rev. 13:1). Paul called him “the man of sin” and “that wicked one,” who is destined for destruction by the Lord (2 Th. 2:3, 8–9). This Satan-inspired enemy of God is also known as the “antichrist” (1 Jn. 2:18). Daniel’s time reference (a time, times, and half a time) is repeated in Revelation 12:14 and equated with other time designations (1260 days in Rev. 11:3 and 12:6; forty-two months in Rev. 11:2 and 13:5). These all indicate three and one-half years—exactly one-half of the seven-year Tribulation period.

While no one knows when these prophecies will be fulfilled, ominous signs in the present world may foreshadow this coming, evil empire. Europe’s fragmentation is giving way to unification similar to ancient Rome’s. Technology and the Internet are binding the people of many nations together, and formerly independent economies have grown interdependent. Meanwhile, Israel grows increasingly isolated in world opinion, while Christians endure persecution as the new, silent minority. These shadows portend a future reality that matches Daniel’s prophecy of a new world order, led by the “little horn,” against the God of heaven.

God spoke through Daniel to give comfort and hope to His people in exile. Today that Word continues to enlighten and encourage believers to be watchful for the coming of the Lord Jesus Christ. God is in control. The times of the Gentiles will one day give way to the Kingdom of the Messiah! In the future time of Tribulation, God will pour out His wrath upon the great statue and the beast that have stood in defiance against Him. God will then send His Son to declare victory.

“And the seventh angel sounded; and there were great voices in heaven, saying, The kingdom of this world is become the kingdom of our Lord, and of his Christ, and he shall reign forever and ever” (Rev. 11:15).