Don't want to promote "Islamophobia," doncha know. Nothing does that like reports of Muslims committing atrocities against Christians and other non-Muslims in the name of Islam—and of course challenging Muslim entities over this persecution is out of the question as far as this Administration is concerned. 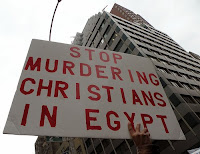 The U.S. State Department removed the sections covering religious freedom from the Country Reports on Human Rights that it released on May 24, three months past the statutory deadline Congress set for the release of these reports.

Thus, the reports do not provide in-depth coverage of what has happened to Christians and other religious minorities in predominantly Muslim countries in the Middle East that saw the rise of revolutionary movements in 2011 in which Islamist forces played an instrumental role.

For the first time ever, the State Department simply eliminated the section of religious freedom in its reports covering 2011 and instead referred the public to the 2010 International Religious Freedom Report—a full two years behind the times—or to the annual report of the U.S. Commission on International Religious Freedom (USCIRF), which was released last September and covers events in 2010 but not 2011.

Leonard Leo, who recently completed a term as chairman of the USCIRF, says that removing the sections on religious freedom from the State Department's Country Reports on Human Rights is a bad idea.

Since 1998, when Congress created USCIRF, the State Department has been required to issue a separate yearly report specifically on International Religious Freedom.

But a section reporting on religious freedom has also always been included in the State Department's legally required annual country-by-country reports on human rights—that is, until now.