In July, 1944 as WWII was still raging, representatives of the 44 Allied nations met at the Mount Washington Hotel in Bretton Woods, New Hampshire to create an international economic system designed to govern post-war monetary relations between independent nation-states.

The meeting resulted in the "Bretton Woods Agreement", which set up a system of economic rules, institutions and procedures that were designed around the yet-future United Nations system. Bretton Woods established the International Monetary Fund (IMF) and the embryonic World Bank.

The chief features of the Bretton Woods system were an obligation for each country to adopt a monetary policy that maintained the exchange rate by tying its currency to the U.S. dollar and the ability of the IMF to bridge temporary imbalances of payments.

In August, 1971 the United States unilaterally pulled out of the Bretton Woods Agreement, breaking the link between gold and the US dollar. For the first time in history, formal links between major world currencies and real commodities was severed.

The action, known as the "Nixon Shock" came in response to America's growing war debt, which resulted in the US experiencing, for the first time in the 20th century, a balance of payments and trade deficit.

By 1971 the Federal Reserve had increased the money supply by 10%, forcing the other Bretton Woods countries into the position of being forced to prop up the US dollar.

(Wikipedia)—To stabilize the economy and combat the 1970 inflation rate of 5.84%, on August 15, 1971, President Nixon imposed a 90-day wage and price freeze, a 10 percent import surcharge, and, most importantly, "closed the gold window", ending convertibility between US dollars and gold. The President and fifteen advisers made that decision without consulting the members of the international monetary system, so the international community informally named it the Nixon shock.

The Nixon Shock immediately caused the US dollar to depreciate. Because oil was priced in dollars, OPEC was suddenly receiving less real income for the same price. The OPEC cartel issued a joint communique stating that, from then on, they would price a barrel of oil against gold.

The Nixon Shock in 1971 was met by the Oil Shock of 1973. During the 1973 Yom Kippur War, President Nixon defied Saudi pressure and authorized Operation Nickel Grass, a strategic airlift of weapons and ammunition to Israel.

On October 16th, OPEC announced it was raising the cartel's price per barrel for oil by 70%. It cut production the next day. Nixon didn't back off on supporting Israel and OPEC imposed an oil embargo on the US, Western Europe and Japan.

By 1974 the price of oil had quadrupled. The stock market crashed. The oil shock produced chaos in the US, with long lines, price controls and even gas rationing. But the Saudis began to break with OPEC on key issues, ending OPEC's hegemony over global oil prices.

Bretton Woods pegged the value of a dollar to the price of gold. Bretton Woods 2 unlinked gold and replaced it with oil. Today, the House of Saud is both the birthplace and wellspring of radical Islamic terrorism and America's "most valuable ally" in the war on terror.

It's nuts. And it isn't even necessary anymore.

According to testimony given before Congress by the GAO (Government Accounting Office) on Thursday, the United States is energy independent right now. Or rather, it could be, all in one single effort. 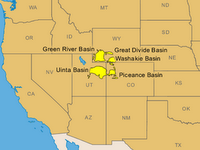 GAO to Obama: More Oil Than Rest of the World!

The GAO estimates that the "Green River Formation"—a vacant tract of federal land where Colorado, Wyoming and Utah come together—contains as much recoverable oil as—get ready for this—all the rest of the world’s proven reserves combined!

Let me say that again. The GAO says the recoverable oil in the Green River Formation is EQUAL to the combined proven reserves of the WHOLE WORLD! (I want to say it again, just because nobody else is saying it, but I will forbear—to let the GAO say it.)

“USGS estimates that the Green River Formation contains about 3 trillion barrels of oil, and about half of this may be recoverable, depending on available technology and economic conditions."

“The Rand Corporation, a nonprofit research organization, estimates that 30 to 60 percent of the oil shale in the Green River Formation can be recovered,” Mittal told the subcommittee. “At the midpoint of this estimate, almost half of the 3 trillion barrels of oil would be recoverable. This is an amount about equal to the entire world's proven oil reserves.”

It is important to understand that Mittal was testifying before Congress, under oath and was not offering some partisan political argument. Her testimony wasn't based on ideology, but rather, on science. But she did point out some of the political potential inherent in developing the Green River project.

"As you can imagine having the technology to develop this vast energy resource will lead to a number of important socioeconomic benefits including the creation of jobs, increases in wealth and increases in tax and royalty payments for federal and state governments,” she said.

What I can't imagine is why the government is sitting on its hands instead of exploiting the chance for energy security and all that would mean for national security?

That is the big question for which the big answer is big money. Big money that flows into US political campaigns. Big money in the form of guaranteed "consulting" jobs for outgoing White House officials.

Big money that is to be made by pretending that alternative sources are a better replacement for petroleum products. But solar power byproducts can never be used to make plastics or nylon or linoleum or trash bags or bicycle tires or shower curtains or lipstick or non-dairy whipped cream.

For that, you need oil. Not windmills. Not solar farms.

This morning, I saw where the Obama administration is about to give $50 million to a Nevada solar farm. The solar farm employs two people. The electricity it produces costs three times as much. And the company itself is not even American!

It almost sounds like a joke looking for a punch line.

The global economic situation is unsustainable; we’ve spent all the money in the world several times over and we’re trying to find a way to spend it one more time.

According to the Book of the Revelation the order of events are these. With the breaking of the first seal comes the rider on the white horse, symbolizing the ascension of the antichrist to a position of global power.

It is significant to note that the rider on the white horse carries a bow—but no arrows. He conquers in a bloodless, ie, political conquest. He's not a warlord. He's a politician.

The second seal is broken next, releasing the rider on the red horse, War. This rider is given power to take peace from the earth and “there was given to him a great sword”.

The third seal releases the rider on the black horse, Famine. He symbolizes world-wide economic depression. References to a measure of wheat or three measures of barley for a penny is symbolic of a day’s food for a day’s pay, whereas oil and wine are symbolic of great wealth.

In the Bible’s Great Depression, the poor will suffer catastrophic poverty, but the rich will appear to weather the storm quite comfortably. We’ve been almost there since the dawn of the 21st century. It feels like at any moment, the trumpet might sound.

We are so close that many argue we are already somewhere between the breaking of the first and the third seals.

We're not. Israel has yet to achieve any measure of peace and safety. No covenant has been confirmed. No rider of sufficient stature has made an appearance on the world stage. Not yet.

But what I want you to see is how little it would take to bring all these events into motion.

If you had never heard of the Bible, and if you knew nothing about Bible prophecy, how would your assessment, given the facts presented, differ from the scenario the Bible says is inevitable?

And that's the point.

"And when these things begin to come to pass, then look up, and lift up your heads; for your redemption draweth nigh" (Luke 21:28).