Global Warming Relegated to Back Burner?

A climate-change skeptic ponders whether it's time to drum up another eco-scare, seeing as how the debate about global warming is "dead." 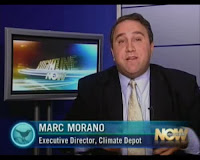 Marc Morano of Climate Depot says President Barack Obama is not the only one who has removed the terminology from his vocabulary.

"Senator John Kerry (D-MA) has said it's extraordinary how you can't even bring up global warming. Harry Reid (D-NV) in the Senate has stopped talking about it. [Senator] Barbara Boxer (D-CA) has moved on," Morano reports. "This is a stunning turnaround from 2006 to 2009."

But he asserts this is not to say that the Environmental Protection Agency and other unelected bureaucrats have stopped working on rules and regulations behind the scenes.

Still, things appear to be heading in the same direction in Europe as they are on Capitol Hill. One newspaper reports the U.N. Climate Campaign is running out of money. That announcement comes after the European Parliament declared it would not be sending delegates to Rio+20, the upcoming U.N. Earth Summit, citing cost. Meanwhile, Germany's chancellor fired her environment minister following a crushing defeat in a key regional election.

It was also shown to be last among all issues in a survey conducted earlier this year by the Pew Research Center.