New Czar Rising: Russia's Election on March 4 May Prove a Bigger Deal than Our Own

The media is fixated on the GOP primaries and the American presidential campaign and giving scant attention to Russia’s upcoming election on Sunday, March 4th. But the Russian vote may prove to be a bigger deal than our own. Here’s why:

Though protest movements against Vladimir Putin throughout Russia in recent months suggest a growing number of Russians finally see the former KGB chief for what he is—a thug and a bully—polls still suggest he is expected to win handily. If those polls are right and Putin does, in fact, reemerge as president then let’s be clear: we will be watching a new Czar rising, a tyrant who will rule with an iron hand over his own people, and look to project Russian power elsewhere in the world. Putin has, for example, drawn sharp criticism from Mikhail Gorbachev who says Putin’s political party is a bad copy of the Soviet Communist Party: anti-freedom and corrupt.


Putin says he will immediately begin to rebuild Russia’s tattered military, investing $772 billion to that end—we should take him at his word and consider seriously why he is so determined to have a stronger military in a world in which Russia faces no real or serious threats to its own national security.


Putin is increasingly anti-American and has said Americans are “living like parasites off the global economy and their monopoly of the dollar.”


“The collapse of the Soviet Union was the biggest geopolitical catastrophe of the century. For the Russian people, it became a real drama. Tens of millions of our citizens and countrymen found themselves outside Russian territory. The epidemic of disintegration also spread to Russia itself.”


For most of us, the greatest geopolitical catastrophes of the 20th century include World Wars I and II, the Holocaust, the killing fields of Cambodia, the genocide in Sudan and Rwanda, and the death of tens of millions under Stalin’s reign of terror, to name a few. Most sane people think the end of the “Evil Empire” was a good thing; Putin isn’t one of them. 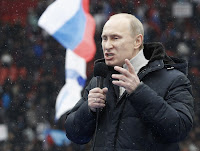 More than anything, Putin wants to regain and reassert the glory and the power of Mother Russia. That means he wants to expand her territory and enlarge her borders. The problem Putin faces is that Russia can’t significantly expand westward because NATO is moving eastward (though Putin has spoken openly of creating a merger with the neighboring country of Belarus, which is also currently run by a tyrannical dictator). Russia can’t expand eastward because China is now a rich and strong and nuclear-armed power. Russia can’t seriously expand northward because there’s not much to gain from the North Pole. Thus, we should expect him to project power southward. Since 2000, he has, in fact, been building strategic alliances with Islamic countries throughout North Africa, the Middle East and Central Asia. He has sold billions of dollars worth of arms to Iran, Syria, Algeria, Libya, Sudan and other Islamic powers. He’s been particularly vocal in defending the tyrants in Tehran and Damascus. Expect Moscow’s focus on the Islamic world to increase dramatically (Note: Putin has spoken openly of creating a Eurasian economic union in Central Asia, similar politically and economically to the European Union but likely dominated by the Kremlin).

Would Putin actually use military force to defend Iran and Syria, and challenge their enemies? We shall see, but I believe the issue is not one of will, but of timing. I think Putin is itching to find a place to showcase Russian military power, but he first has to make certain his forces are truly ready again for battle.

It should also be noted that the Hebrew prophet Ezekiel wrote in chapters 38 and 39 of his biblical text that in the “last days” there will be a political and military alliance between Russia (Magog), Iran (Persia) and a coalition of other “epicenter” countries that will move against an increasingly secure and prosperous State of Israel for an apocalyptic battle driven by greed and a lust for power. Ultimately, the prophecy tells us that Russia and her allies will be decimated in this war and face divine judgment, while Israel will be saved. It remains too early to say that we have arrived at such a fulfillment of the “War of Gog and Magog” prophecies, but the geopolitical, economic and spiritual trendlines suggest we are steadily moving in that direction.

For all these reasons, Sunday’s presidential elections in Russia may prove a bigger deal over the short-run—and over the long-run—than our own. The trendlines are intriguing, to say the least. Russia will pose an increasing threat to American and Western values and interests, and in time will pose an even greater threat to Israel and to the security and stability of the Middle East. The media may not be paying attention, but we should.

Putin Set to Re-Emerge as the Czar of Russia: Will Run for President March 4, 2012 • BPB (Joel Rosenberg)